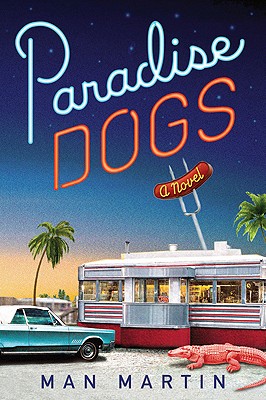 By Man Martin
$25.99
This item is backordered. Please contact us for an estimated availability date.

Adam Newman once had it all. But then he lost it.
Now Adam yearns to reunite with his estranged wife, Evelyn, and recapture the Edenic life they once had running Paradise Dogs, the roadside hot-dog restaurant now legendary throughout central Florida.
He has a few obstacles along the way. For starters, there’s his impending marriage to Lily. There’s also the matter of a quarter million dollars’ worth of diamonds that he mislaid, along with what appears to be a shadowy conspiracy that is buying up land around the Cross-Florida Canal (and which may or may not be a product of Adam’s alcohol-infused imagination).
Despite his own troubles---and a brief stay in Chattahoochee---Adam looks to mentor his son, Addison, in the ways of love. Awkward, unsure, and employed as the world’s least accurate obituary writer, Addison pines for a beautiful and painfully earnest linguistic student but must compete for her attention with his older and more sophisticated half brother from Evelyn’s first marriage.
But if anybody can set these worlds in order, it is Adam, who has an uncanny knack for being in the right place at the right time and allowing others to believe he’s someone he’s not. Whether it’s delivering a baby, rescuing a marriage, or exposing a Communist conspiracy, our protagonist is up for the job. Paradise Dogs, from Georgia Author of the Year Award winner Man Martin, is a farcical tale of paradise lost, the American Dream, and the true measures of love

Man Martin spent his childhood in Florida and Georgia and currently teaches high school English in Atlanta. He is the author of "Days of the Endless Corvette, "which won the 2008 Georgia Author of the Year Award for First Novel.

Man Martin is the recipient of the Georgia Writers Association's Author of the Year for Fiction in 2012 for Paradise Dogs!

An Atlanta Magazine Top Ten pick of 2011
"His bumbling hero, Adam Newman, springs from an imagination somewhere between Carl Hiaasen and A Confederacy of Dunces."--Atlanta Magazine

"A full-bore slapstick marathon in the tradition of Carl Hiaasen."--Publishers Weekly "A satirical cross between Carl Hiaasen's riotous rants about overdevelopment and the delusional swagger of John Kennedy Toole's Ignatius J. Reilly in A Confederacy of Dunces. Fine writing and slapstick comedy can be a prickly pairing, but Martin makes it look effortless." -- Atlanta Magazine  A "hoot of a tale perfect for summer reading" --New York Post

"Driven by the charm of Adam, it’s bumbling hero – a sort of 'holy fool' who impersonates whatever profession is most useful at the time."--Orlando Sentinel "The pacing is perfect, the tone is the right blend of picaresque and touching. Man Martin is simply brilliant."--Booklist "Man Martin’s Paradise Dogs shouts “retro’’ with its cover, a neon title riding in the sky above an aqua car, a roadside diner and a pink (!) alligator. We’re boarding the Wayback Machine to Central Florida in the 1960s, B.D. (Before Disney)....Martin – who grew up in Florida and now lives in Georgia – has a deft hand with local color and shows true affection for his goofy hero. [A]n agreeable ride
back to an orange-blossom-scented past not yet paved with theme parks."--Orlando Home & Leisure

"With a nod to It's a Mad, Mad, Mad, Mad World, fans who enjoy an out of control nostalgic thriller will enjoy Adam's strange sense of second chances as he recalls his happiest moment was selling dirty dogs but ignores the grease burns." -- Midwest Book Review

“A generous, wry, and endlessly sweet novel, one that swept me out of a gloomy, blue day and into Man Martin’s surreal and hilarious take on pre-Disney Florida.”--Lauren Groff, author of The Monsters of Templeton

“A delicious farce – with a head and a heart.  At the center is Adam Newman, the most hilarious character to come along in ages, a wild-man knight errant who’s able to solve anyone’s problems but his own.  Plenty of absurd situations and laugh-out-loud writing, but with an underlying sadness and compassion that will take you by surprise.”--Nancy Zafris, author of The Metal Shredders and Lucky Strike and fiction editor of The Kenyon Review

“We've got Western novelists staked out on mountain ranges, Southern writers who are cast in bronze on courthouse squares, and Literary Gods sailing a beam reach up East. And then there's Florida. One state with its own sticker on fiction. So Georgia writer Man Martin must’ve slipped across the Okefenokee to get Paradise Dogs so right, and so damn funny, like a retro multi-fold post card from the middle of the Sunshine State before Disney eared its way in.”--Sonny Brewer, author of The Poet of Tolstoy Park and The Widow and the Tree

"In Paradise Dogs, Man Martin has created a character full of verve and unequaled passion. Adam Newman is bound to set readers on fire with his bawdy desire to make things right. This book is righteous, riotous, and riveting. A finely wrought tale of man versus everything."--Doug Crandell, author of The Flawless Skin of Ugly People and Hairdos of the Mildly Depressed

“In Paradise Dogs, Man Martin offers the reader my favorite type of protagonist: part Willie Loman, part Ignatius J. Reilly, and part Roman Strickland from Brad Barkley’s Money, Love.  But Adam Newman is his own man wholly.  He’s the true lovable scam artist wishing to do right.  This is a great, fun read, full of absurdities, perplexities, and wonderfully cathartic insights.”--George Singleton, author of Half Mammals of Dixie and Workshirts for Madmen

“In the beginning, Adam and Evelyn had it good—they had love, questionable good looks, even riches—they had Paradise Dogs. Then, who screws things up? Refreshingly, Adam. Adam Newman, the ultimate Everyman: sweet-talker, conjurer, sneak, klutz, schemer, gambler, inventor, conspiracy theorist, hero, loveable drunk. After bringing banishment upon himself, he embarks on a wild adventure with more twists and turns and ups and downs than Space Mountain, keeping his eye all the while on an ultimate return to Paradise. Don’t miss out on this ride—it’s sure to make you gasp, shout, and laugh out loud.”--Meg Kearney, former Associate Director of the National Book Foundation

“Paradise Dogs is crisply paced, sharply written, nimbly structured. It has that rare combination of headlong momentum and the line-by-line finesse that makes a reader linger and luxuriate. Man Martin is no longer just a talent to watch; he’s a writer to celebrate. Loudly, and now.”--Michael Griffith, author of Spikes and Bibliophilia and Trophy (forthcoming) and founding editor of Yellow Shoe Fiction