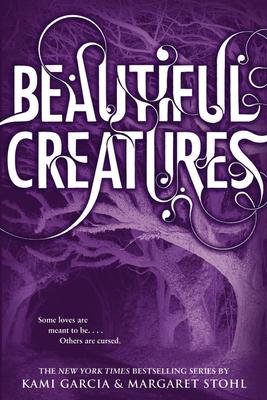 This is book number 1 in the Beautiful Creatures series.

“Ethan Wate has fallen into an impossible relationship with the beautiful outcast Lena Duchannes. But Lena has a secret that may prove more challenging than not fitting in at school. Combining the atmosphere of a Tennessee Williams drama and the bigotry of To Kill a Mockingbird, this gorgeously composed debut novel is a rare treat.”
— Krys Tourtois, Schuler Books & Music, Lansing, MI

The first book in the instant NYT bestselling gothic fantasy series; a modern paranormal romance set against the gothic backdrop of an isolated southern town.
Lena Duchannes is unlike anyone the small Southern town of Gatlin has ever seen, and she's struggling to conceal her power, and a curse that has haunted her family for generations. But even within the overgrown gardens, murky swamps and crumbling graveyards of the forgotten South, a secret cannot stay hidden forever.

Ethan Wate, who has been counting the months until he can escape from Gatlin, is haunted by dreams of a beautiful girl he has never met. When Lena moves into the town's oldest and most infamous plantation, Ethan is inexplicably drawn to her and determined to uncover the connection between them.

In a town with no surprises, one secret could change everything.

Praise for Beautiful Creatures:
An Instant New York Times Bestseller
An Indie Next List Selection
A William Morris YA Debut Award Finalist
A NYPL "Book for the Teen Age"An ALA 2015 Popular Paperbacks Pick

"A potent mix of the gothic, the mythic, and the magical...With original characters, complex world building, and crackling prose, this is masterful storytelling." - Deborah Harkness, #1 New York Times bestselling author of A Discovery of Witches on the Beautiful Creatures novels

"Like a thick, hot Carolina summer, this story seeps into you until it's all you can think about." - Carrie Ryan, NYT bestselling author of The Forest of Hands and Teeth


"This book has it all: a creepy setting, a deadly curse, reincarnation, spells, witchcraft and voodoo, plus characters that simply will not let the reader put the book down until finished...Who could ask for more? A sequel? Please!" - VOYA

"In the Gothic tradition of Anne Rice...Give this to fans of Stephenie Meyer's Twilight or HBO's "True Blood" series." - School Library Journal

"[Readers] will be swept up by the haunting and detailed atmosphere, the conventions and strictures of Southern life, and a compelling and dimensional mythology." - Publishers Weekly