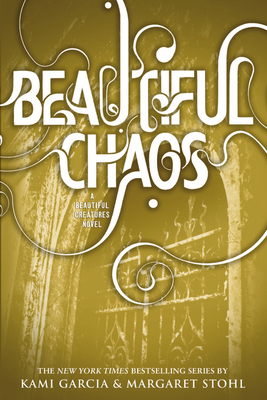 This is book number 3 in the Beautiful Creatures series.

Ethan Wate thought he was getting used to the strange, impossible events happening in Gatlin, his small Southern town. But now that Ethan and Lena have returned home from the Great Barrier, strange and impossible have taken on new meanings. Swarms of locusts, record-breaking heat, and devastating storms ravage Gatlin as Ethan and Lena struggle to understand the impact of Lena's Claiming. Even Lena's family of powerful Supernaturals is affected -- and their abilities begin to dangerously misfire. As time passes, one question becomes clear: What -- or who -- will need to be sacrificed to save Gatlin?

For Ethan, the chaos is a frightening but welcome distraction. He's being haunted in his dreams again, but this time it's not Lena -- and the mysterious figure is following him out of his dreams and into his everyday life. Worse, Ethan is gradually losing pieces of himself -- forgetting names, phone numbers, even memories. He doesn't know why, and he's afraid to ask.

Sometimes there's no going back. And this time there won't be a happy ending.
SPECIAL BONUS: Includes "Dream Dark," a thrilling short story set before Beautiful Chaos. When Link joined his best friend, Ethan Wate, on a quest through a mysterious network of underground passageways endlessly crisscrossing the South, he knew the journey would be dangerous. But he had no idea it would change his life forever.

Kami Garcia and Margaret Stohl are longtime friends and coauthors of the #1 New York Times bestselling Beautiful Creatures series. The first book in the series, Beautiful Creatures, is now a major motion picture. In addition to writing together, they have written solo novels: Unbreakable, an instant New York Times bestseller and the first book in Kami's series, The Legion; and Icons, the first book in Margaret's Icons series, which is currently in development as a feature film. Both books are available now. Margaret and Kami are currently at work on the sequel to Dangerous Creatures, available in spring 2015. They invite you to visit them online at kamigarcia.com & margaret-stohl.com.

"A potent mix of the gothic, the mythic, and the magical...With original characters, complex world building, and crackling prose, this is masterful storytelling."—Deborah Harkness, #1 New York Times bestselling author of A Discovery of Witches on the Beautiful Creatures novels

"This richly imagined series has all the elements of a successful Southern gothic supernatural romance....The ambiguity of good and evil adds appealing complexity....Genre fans will love it."—VOYA