I Am the Weapon (The Unknown Assassin #1) (Paperback) 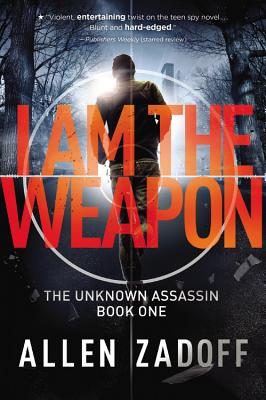 This is book number 1 in the The Unknown Assassin series.

They needed the perfect assassin.

Boy Nobody is the perennial new kid in school, the one few notice and nobody thinks much about. He shows up in a new high school in a new town under a new name, makes a few friends, and doesn't stay long. Just long enough for someone in his new friend's family to die -- of "natural causes." Mission accomplished, Boy Nobody disappears, moving on to the next target.

But when he's assigned to the mayor of New York City, things change. The daughter is unlike anyone he has encountered before; the mayor reminds him of his father. And when memories and questions surface, his handlers at The Program are watching. Because somewhere deep inside, Boy Nobody is somebody: the kid he once was; the teen who wants normal things, like a real home and parents; a young man who wants out. And who just might want those things badly enough to sabotage The Program's mission.

In this action-packed series debut, author Allen Zadoff pens a page-turning thriller that is as thought-provoking as it is gripping, introducing an utterly original and unforgettable antihero.

Allen Zadoff is the author of several acclaimed novels, including Food, Girls, and Other Things I Can't Have, winner of the Sid Fleischman Humor Award and a YALSA Popular Paperback for Young Adults. He is a graduate of Cornell University and the Harvard University Institute for Advanced Theater Training. His training as a super spy, however, has yet to be verified.

Praise for Boy Nobody:
A 2014 Top Ten Quick Pick for Reluctant Young Adult Readers
* "Zadodff shines in this violent, entertaining twist on the teen spy novel. [Boy Nobody is]...a tense and exciting story with a strong cast...blunt and hard edged narration and twists will keep readers riveted."—Publishers Weekly (starred review)

* "[Boy Nobody] is like a darker version of Alex Rider, [and] Thomas in James Dashner's Maze Runner series... Fans of such fast-paced action novels should love this first installment in the Boy Nobody series."—VOYA (starred review)

"Operating in the tradition of both James Bond and of Robert Cormier's I Am the Cheese(1977), Boy Nobody is an auspicious first volume in a promised new series of action-adventure thrillers that will keep readers clamoring for more."—Booklist

"Fast, furious, and fun...Plenty of action and drama, and hairpin turns [that] will keep readers guessing; a twist in the end will have them begging for more."—Kirkus Reviews

"A promising start to an exciting new series."—SLJ

"I cannot wait to get this title, first in a new series, into the hands of my male students who are often at a loss for material to read."—Library Media Connection

"When James Bond was a little boy, he wanted to grow up to be half as hard-core as Boy Nobody."—Barry Lyga, New York Times bestselling author of I Hunt Killers