MegaThreats: Ten Dangerous Trends That Imperil Our Future, And How to Survive Them (Hardcover) 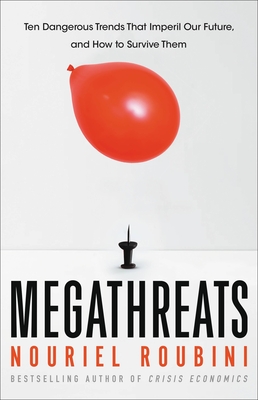 "Read and pay attention" (Martin Wolf, the Financial Times): the bestselling author of Crisis Economics argues we are heading toward the worst economic catastrophe of our lifetimes, unless we can defend against ten terrifying threats.

Renowned economist Nouriel Roubini was nicknamed “Dr. Doom,” until his prediction of the 2008 housing crisis and Great Recession came true--when it was too late. Now he is back with a much scarier prediction, one that we ignore at our peril. There are no fewer than ten overlapping, interconnected threats that are so serious, he calls them Megathreats. From the worst debt crisis the world has ever seen, to governments pumping out too much money, to borders that are blocked to workers and to many shipments of goods, to the rise of a new superpower competition between China and the U.S., to climate change that strikes directly at our most populated cities, we are facing not one, not two, but ten causes of disaster. There is a slight chance we can avoid them, if we come to our senses—but we must act now.

In the 1970s, the U.S. faced stagflation: high rates of inflation combined with stagnant employment and growth. Today, we are heading toward a Great Stagflation that will make the 1970s look like a walk in the park.

Nouriel Roubini is a professor of economics at New York University's Stern School of Business and the founder and chairman of Roubini Global Economics. He has served in the White House and the U.S. Treasury. He lives in New York City.

“Roubini cuts to the real problems like a hot knife through butter, with a clarity of mind that is rare among economists. I have never seen a more lucid and nuanced account of our financial condition. Not only will the reader be better off after reading this book, but the world will be a better place when central bankers absorb its message."
—Nassim Nicholas Taleb, author of The Black Swan and Skin in the Game

“No economist is better able to curdle the reader's blood than Nouriel Roubini. What makes his views significant however is not that they are scary, but that they generally prove to be true. With this book, alas, he has surpassed even his high standards: the ten megathreats he details are as scary as they are plausible. Forewarned is forearmed. Read and pay attention."—Martin Wolf, Chief Economics Commentator, the Financial Times

“From the economics guru who predicted the 2008 crash, MegaThreats breaks down the most dangerous risks threatening global peace and prosperity in the coming decades. Nouriel offers a sobering analysis of the challenges we’ll face to avert the worst, as each crisis reinforces the others and hinders our ability to respond to all of them. The choice is clear: either we overcome deep-rooted political and geopolitical barriers to mount an adequate collective response (my preference!), or we sleepwalk into a new era of chaos and upheaval. A timely and compelling read, MegaThreats is a wake-up call for humanity.”
—Ian Bremmer, President of Eurasia Group and author of The Power of Crisis

“A tour de force drawing on economics, finance, history, international relations, and Nouriel Roubini’s own rich personal experiences. This clever and timely analysis does more than render accessible complex and crucial concepts that are both in our present and future. It also powerfully illustrates how the combination of flawed human judgment, faulty policies, and a collective disregard of natural constraints now confronts us with perils whose reach goes well beyond just our generation. Ignore this book at your own peril.”—Mohamed A. El-Erian, author of New York Times bestsellers The Only Game in Town and When Markets Collide

“Calm, clear-headed and possibly prescient, MegaThreats combines important historical analogies, broad-ranging discussion of current trends, and insightful economic analysis to produce a bracing assessment of long-term risks to the global economy. Dark, perhaps, but brilliant, for sure.”
—Kenneth Rogoff, co-author of This Time is Different

"If recent history has taught us one thing, it is that Black Swan events happen—and more frequently than we expect. Nouriel Roubini describes the most threatening swans and how we can avoid being pecked to death.  Technology offers solutions but, as Nouriel warns, technology without political will buys us nothing.  This is not an optimistic forecast, but it is a sobering and necessary one.”
—Barry Eichengreen, George C. Pardee & Helen N. Pardee Chair and Distinguished Professor of Economics and Political Science, University of California, Berkeley

“[Roubini’s] analysis of present-day trends, especially in economics, is well-informed and insightful, and will give readers much disquieting food for thought.”
—Publishers Weekly