"Promise Me You'll Shoot Yourself": The Mass Suicide of Ordinary Germans in 1945 (Hardcover) 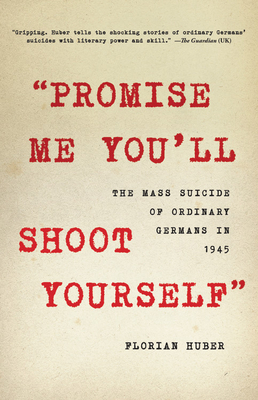 The astounding true story of how thousands of ordinary Germans, overcome by shame, guilt, and fear, killed themselves after the fall of the Third Reich and the end of World War II.
By the end of April 1945 in Germany, the Third Reich had fallen and invasion was underway. As the Red Army advanced, horrifying stories spread about the depravity of its soldiers. For many German people, there seemed to be nothing left but disgrace and despair. For tens of thousands of them, the only option was to choose death -- for themselves and for their children.
"Promise Me You'll Shoot Yourself" recounts this little-known mass event. Using diaries, letters, and memoirs, historian Florian Huber traces the euphoria of many ordinary Germans as Hitler restored national pride; their indifference as the Führer's political enemies, Jews, and other minorities began to suffer; and the descent into despair as the war took its terrible toll, especially after the invasion of the Soviet Union. Above all, he investigates how suicide became a contagious epidemic as the country collapsed.
Drawing on eyewitness accounts and other primary sources, "Promise Me You'll Shoot Yourself" presents a riveting portrait of a nation in crisis, and sheds light on a dramatic yet largely unknown episode of postwar Germany.

Dr. Florian Huber was born in 1967 and wrote his PhD on British policy regarding the postwar occupation of Germany. He is the author of several works of history and has also produced award-winning documentaries on contemporary subjects, including the fall of the Berlin Wall, the mysterious end of the writer Antoine de Saint-Exupéry, and the 1936 Olympic Games.

"Vivid and disturbing...Though the topic is relentlessly grim, Huber portrays his subjects with empathy and offers key insights into the German mindset before, during, and after WWII. Readers will be convinced that reckoning with the war's legacy requires studying this underexamined tragedy."—Publishers Weekly

"Huber retells the self-annihilation of May 1945 in dispassionate, vivid detail...It's hard not to hear faint echoes in our current plight."—Andrew Anthony, The Observer

"Huber tells this terrible history with compassion and care. He writes with an ease that makes the book flow smoothly despite the bleak nature of the subject, aided by a fine translation from the German by Imogen Taylor."—Laurence Rees, Telegraph

"A grimly compelling study of the psychology of fanaticism."—The Economist

"All eyes will be opened by the facts on offer in "Promise Me You'll Shoot Yourself"...Huber follows a cast of real, all-too-human characters as they head into darkness...His terrible evidence is priceless, and belongs on every bookshelf."—James Hawes, The Spectator