First Casualty: The Untold Story of the CIA Mission to Avenge 9/11 (Hardcover) 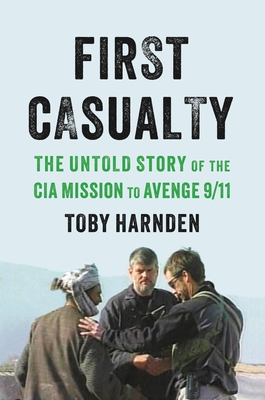 An award-winning journalist reveals the dramatic true story of the CIA's Team Alpha, the first Americans to be dropped behind enemy lines in Afghanistan after 9/11.

America is reeling; Al-Qaeda has struck and thousands are dead. The country scrambles to respond, but the Pentagon has no plan for Afghanistan—where Osama bin Laden masterminded the attack and is protected by the Taliban. Instead, the CIA steps forward to spearhead the war. Eight CIA officers are dropped into the mountains of northern Afghanistan on October 17, 2001. They are Team Alpha, an eclectic band of linguists, tribal experts, and elite warriors: the first Americans to operate inside Taliban territory. Their covert mission is to track down Al- Qaeda and stop the terrorists from infiltrating the United States again.

First Casualty places you with Team Alpha as the CIA rides into battle on horseback alongside the warlord Abdul Rashid Dostum. In Washington, DC, few trust that the CIA men, the Green Berets, and the Americans’ outnumbered Afghan allies can prevail before winter sets in. On the ground, Team Alpha is undeterred. The Taliban is routed but hatches a plot with Al-Qaeda to hit back. Hundreds of suicidal fighters, many hiding weapons, fake a surrender and are transported to Qala-i Jangi—the “Fort of War.”

Team Alpha’s Mike Spann, an ex-Marine, and David Tyson, a polyglot former Central Asian studies academic, seize America’s initial opportunity to extract intelligence from men trained by bin Laden—among them a young Muslim convert from California. The prisoners revolt and one CIA officer falls—the first casualty in America’s longest war, which will last two decades. The other CIA man shoots dead the Al-Qaeda jihadists attacking his comrade. To survive, he must fight his way out against overwhelming odds.

Award-winning author Toby Harnden gained unprecedented access to all living Team Alpha members and every level of the CIA. Superbly researched, First Casualty draws on extensive interviews, secret documents, and deep reporting inside Afghanistan. As gripping as any adventure novel, yet intimate and profoundly moving, it tells how America found a winning strategy only to abandon it. Harnden reveals that the lessons of early victory and the haunting foretelling it contained—unreliable allies, ethnic rivalries, suicide attacks, and errant US bombs—were ignored, tragically fueling a twenty-year conflict.

"Masterful, complex, and heartfelt, from the deeply personal to the critically strategic. Captures many lessons on many levels." —Ambassador Hank Crumpton, former senior CIA officer

Toby Harnden is a winner of the Orwell Prize for Books. A former foreign correspondent for the Sunday Times of London and the Daily Telegraph who reported from thirty-three countries, he specializes in terrorism and war. Born in England, Harnden was imprisoned in Zimbabwe, prosecuted in Britain for protecting confidential sources, and vindicated by a $23 million public inquiry in Ireland. A dual British and US citizen, he spent a decade as a Royal Navy officer before becoming a journalist. He holds a First Class degree in modern history from Oxford and is the author of First Casualty, Bandit Country: The IRA & South Armagh, and Dead Men Risen: An Epic Story of War and Heroism in Afghanistan. Previously based in London, Belfast, Jerusalem, Baghdad, and Washington, DC, he lives in Virginia.

"This is Afghanistan's Black Hawk Down...Harnden’s account is both well-informed and panoramic." —Daily Telegraph (UK)

"The hard-to-imagine drama, in the hands of another narrator, could easily turn overwrought; in this book, it is not. First Casualty is rife with heroic moments.  But it is the variety of the human reactions in those moments, and afterward, that separates this book from others. Fear, combat fatigue, and sadness appear often in the narrative...This book is compelling, sometimes disturbing, but in a necessary way." —Philip Mudd, former senior CIA officer, The Cipher Brief

"Storytelling at its best—educational and inspirational. A unique, important, and enduring history captured for all who want to learn." —Ambassador Hank Crumpton, former senior CIA officer

"Harnden...secured a coup by persuading the CIA to give him access...a terrific action narrative."

“First Casualty reads like a Tom Clancy thriller, yet every word is true, and painstakingly researched. This is modern warfare close-up and raw: the pity, the heroism, the cruelty, and very occasionally some moments of glory too, as human beings are pushed to their furthest limits of endurance, and beyond. Harnden tells the extraordinary story of the battle of Qala-i-Jangi with verve, intelligence, acute analysis and flashes of ironic wit. It would make a terrific movie.”—Andrew Roberts, author of Churchill: Walking with Destiny

"This is an amazing book - highly recommended." —Marc Ambinder

"Harnden’s scoop is to have convinced the CIA to give him access to its key men from those early days.” —The Spectator

"First Casualty is the closest most readers will come to really knowing a spy; Harnden intimately portrays who these men were and are as America attempts to extract itself from its longest war."—James Pekoll, Booklist

"Harnden skillfully interweaves dramatic action sequences with the backstories of the book’s central figures, and briskly highlights the failures of U.S. policy in Afghanistan. Readers will be swept up in this little-known chapter of America’s 'forever war.'"—Publishers Weekly

“The heart of Harnden’s readable book is the Battle of Qala-i Jangi, a bloody, six-day revolt of around 400 al Qaeda prisoners in a 19th-century fortress designed by British engineers during earlier imperial adventures in northern Afghanistan…Harnden’s scoop is to have convinced the CIA to give him access to its key men from those early days.”—Justin Marozzi, The Spectator