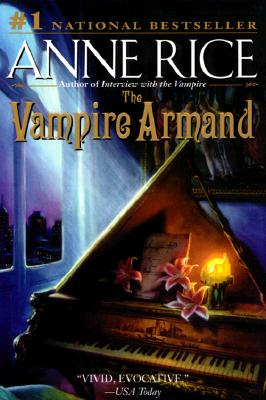 By Anne Rice
$14.95
This item is backordered. Please contact us for an estimated availability date.

In the latest installment of The Vampire Chronicles, Anne Rice brings us the mesmerizing story of the eternally young Armand--who first appeared in all his dark glory in the now-classic Interview with the Vampire. . . .

Anne Rice is the author of twenty books. She lives in New Orleans with her husband, the poet and painter Stan Rice. "From the Hardcover edition."

"ARMAND'S LIFE UNFOLDS IN RICH, VELVETY PROSE. . . . THIS IS A SUMPTUOUS ADDITION TO THE SERIES."
--Library Journal

"ANNE RICE FANS WILL NO DOUBT BE THRILLED. . . . [Armand] until now has played a small role in the Vampire Chronicles. Here he assumes center stage, relating his five hundred years of life to fledgling vampire David Talbot, who plays amanuensis to Armand as he did to Lestat. . . . It's not just the epic plot but Rice's voluptuary worldview that's the main attraction. . . . Elegant narrative has always been her hallmark. . . . Rice is equally effective in showing how Armand eventually loses his religion and becomes 'the vagabond angel child of Satan,' living under the Paris cemeteries and founding the Grand Guignol-ish Theatre des Vampires. In the twentieth century, a rehabilitated Armand regains his faith but falls in love with two children who save his life. By the conclusion of Armand, the pupil has become the mentor."
--The Washington Post

"LAVISHLY POETIC . . . THE FINAL SCENE IS A STUNNER."
--Publishers Weekly