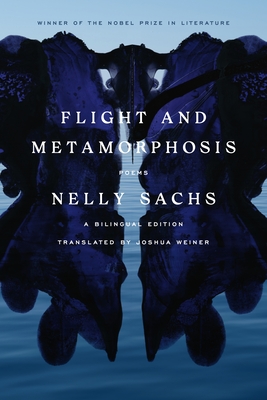 Nelly Sachs (1891–1970) was a dramatist and poet. Born into a Jewish family in Berlin, she was forced to flee Germany and escape to Sweden with her mother in 1940, where she worked as a translator. Her collections of poetry include In the Habitations of Death, Eclipse of Stars, And No One Knows Where to Go, and Flight and Metamorphosis. She was awarded the Nobel Prize in Literature in 1966.

Joshua Weiner is a poet and translator. He is the author of Berlin Notebook: Where Are the Refugees?, The Figure of a Man Being Swallowed by a Fish, From the Book of Giants, and The World’s Room, and he is the editor of At the Barriers: On the Poetry of Thom Gunn. From 1997 to 2021 he served as the poetry editor at Tikkun magazine. He is a professor of English at the University of Maryland, College Park, and lives in Washington, D.C.

Named a Best Poetry Collection of 2022 by The Washington Post

"Full of shifting surprises, mysteries and depths . . . [Sachs arrives] home as if longing is itself home, a domain of night, of oblivion, terror, also solace. The longing that Sachs diagnoses and expresses derives from the kind of violence and politics that many Americans can witness but may not know firsthand. Still, that longing, cloaked in existential darkness with glints of light and stripped of explicit context, has everything to do with our common humanity." —Daisy Fried, The New York Times Book Review

“A more complete expression of what new generations of English-language readers will discover to be a great visionary poet . . . With an abstract, lyrical style, Sachs probes the limits of meaning in a universe where God has contracted ‘into Himself in order to create the world’ . . . The timeless lyricism of Flight and Metamorphosis may be what we need as war, atrocity, and exile return to Europe.” —David Woo, Poetry Foundation

"A stunning German to English translation . . . Each poem in Flight and Metamorphosis is a treasure trove of imagery that provides avenues of exploration for a reader to meditate on and puzzle through without end." —Karren Alenier, Scene4

"This book is divine. Sachs’ poems are exquisitely crafted in German and in Weiner’s English, but they are also divine because Sachs and her latest translators are aware of a higher power in language . . . there are poems in Flight and Metamorphosis that express a mellow rapture and a poise that can only be called wise . . . Weiner has rendered the powerful, haunting poems of Flucht und Verwandlung in accessibly magisterial English. Flight and Metamorphosis will stand as a crucial contribution: the definitive English translation of this collection, one of the most powerful Sachs wrote." —Stephan Delbos, B O D Y

"Read­ers will espe­cial­ly appre­ci­ate this trans­la­tion of Flight and Meta­mor­pho­sis for Weiner’s capa­cious and engag­ing intro­duc­tion; he sit­u­ates Sachs and her work broad­ly in twen­ti­eth-cen­tu­ry lit­er­a­ture . . . Read­ing Sachs’s poems, as we col­lec­tive­ly roar through the twen­ty-first cen­tu­ry, the res­o­nances of her work are deeply mean­ing­ful. Sachs’s poems pro­vide suc­cor as we watch con­tin­ued refugee crises result­ing from both pol­i­tics and cli­mate cat­a­stro­phes." —Julie R. Enszer, Jewish Book Council

"Weiner does a masterly job . . . Once you hear, even in translation, Sachs’s eerie and astringent music, and encounter her numinous fervor, you will surely be a convert." —David Wojahn, On the Seawall

“Compressed power that, at its best, is starkly beautiful . . . There’s a rawness to many of these poems—a sense of exposure that extends to the physical . . . There’s certainly considerable power to the collection, a mature poet at work here. It’s good also to have this collection translated in its entirety—in contrast to the previous sampler-volumes of Sachs’s work—, as there is also a unity to the work . . . [Flight and Metamorphosis] certainly makes for a good introduction to this important poet.” —M. A. Orthofer, The Complete Review