Hole in My Life (Hardcover) 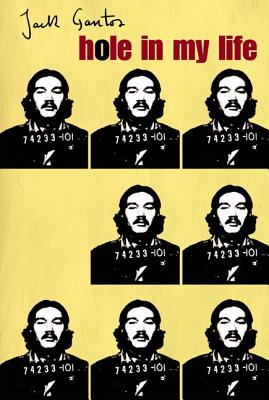 Becoming a writer the hard way

In the summer of 1971, Jack Gantos was an aspiring writer looking for adventure, cash for college tuition, and a way out of a dead-end job. For ten thousand dollars, he recklessly agreed to help sail a sixty-foot yacht loaded with a ton of hashish from the Virgin Islands to New York City, where he and his partners sold the drug until federal agents caught up with them. For his part in the conspiracy, Gantos was sentenced to serve up to six years in prison.

In Hole in My Life, this prizewinning author of over thirty books for young people confronts the period of struggle and confinement that marked the end of his own youth. On the surface, the narrative tumbles from one crazed moment to the next as Gantos pieces together the story of his restless final year of high school, his short-lived career as a criminal, and his time in prison. But running just beneath the action is the story of how Gantos – once he was locked up in a small, yellow-walled cell – moved from wanting to be a writer to writing, and how dedicating himself more fully to the thing he most wanted to do helped him endure and ultimately overcome the worst experience of his life. This title has Common Core connections.

Jack Gantos has written books for people of all ages, from picture books and middle-grade fiction to novels for young adults and adults. His works include Hole in My Life, a memoir that won the Michael L. Printz and Robert F. Sibert Honors, Joey Pigza Swallowed the Key, a National Book Award Finalist, and Joey Pigza Loses Control, a Newbery Honor book. Jack was born in Mount Pleasant, Pennsylvania, and when he was seven, his family moved to Barbados. He attended British schools, where there was much emphasis on reading and writing, and teachers made learning a lot of fun. When the family moved to south Florida, he found his new classmates uninterested in their studies, and his teachers spent most of their time disciplining students. Jack retreated to an abandoned bookmobile (three flat tires and empty of books) parked out behind the sandy ball field, and read for most of the day. The seeds for Jack’s writing career were planted in sixth grade, when he read his sister’s diary and decided he could write better than she could. He begged his mother for a diary and began to collect anecdotes he overheard at school, mostly from standing outside the teachers’ lounge and listening to their lunchtime conversations. Later, he incorporated many of these anecdotes into stories.  While in college, he and an illustrator friend, Nicole Rubel, began working on picture books. After a series of well-deserved rejections, they published their first book, Rotten Ralph, in 1976. It was a success and the beginning of Jack’s career as a professional writer. Jack continued to write children’s books and began to teach courses in children’s book writing and children’s literature. He developed the master’s degree program in children’s book writing at Emerson College and the Vermont College M.F.A. program for children’s book writers. He now devotes his time to writing books and educational speaking. He lives with his family in Boston, Massachusetts.

“A memoir, by turns harrowing and hilarious, about a huge mistake.” —Miami Herald

“His account is remarkably free of both self-pity and self-censorship . . . This is a tale of courage and redemption, proving that a bad start in life does not have to lead to a bad life story.” —The New York Times Book Review

“Gantos really is Everyman, but an Everyman who has landed himself into a deeper pit than most. What separates Gantos is the determination that took him out of his dreams and into a successful life as a writer. Those writerly skills are in full evidence here, in this thoughtful and provocative memoir as valuable to those who have never heard of Gantos as to those who have read all of his books.” —Hyde Park Review of Books

“This true tale of the worst year in the author's life will be a big surprise for his many fans . . .This is a story of mistakes, dues, redemption, and finally success at what he always wanted to do: write books.” —Starred, Kirkus Reviews