The Violent Bear It Away: A Novel (FSG Classics) (Paperback) 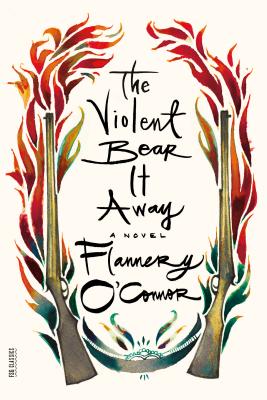 A brilliant, innovative novel, acutely alert to where the sacred lives—and where it does not

First published in 1960, The Violent Bear It Away is a landmark in American literature—a dark and absorbing example of the Gothic sensibility and bracing satirical voice that are united in Flannery O'Connor's work.
In this, O'Connor's second novel, the orphaned Francis Marion Tarwater and his cousin, the schoolteacher Rayber, defy the prophecy of their dead uncle that Tarwater will become a prophet and baptize Rayber's young son, Bishop. A series of struggles ensues, as Tarwater fights an internal battle against his innate faith and the voices calling him to be a prophet while Rayber tries to draw Tarwater into a more "reasonable" modern world. Both wrestle with the legacy of their dead relative and lay claim to Bishop's soul. All this is observed by O'Connor with an astonishing combination of irony and compassion, humor and pathos.

Flannery O'Connor was born in Savannah, Georgia, in 1925. When she died at the age of thirty-nine, America lost one of its most gifted writers at the height of her powers. O’Connor wrote two novels, Wise Blood (1952) and The Violent Bear It Away (1960), and two story collections, A Good Man Is Hard to Find (1955) and Everything That Rises Must Converge (1964). Her Complete Stories, published posthumously in 1972, won the National Book Award that year, and in a 2009 online poll it was voted as the best book to have won the award in the contest’s 60-year history. Her essays were published in Mystery and Manners (1969) and her letters in The Habit of Being (1979). In 1988 the Library of America published her Collected Works; she was the first postwar writer to be so honored. O’Connor was educated at the Georgia State College for Women, studied writing at the Iowa Writers’ Workshop, and wrote much of Wise Blood at the Yaddo artists’ colony in upstate New York. She lived most of her adult life on her family’s ancestral farm, Andalusia, outside Milledgeville, Georgia.

“There is very little contemporary fiction which touches the level of Flannery O'Connor at her best.” —Alan Pryce-Jones, New York Herald Tribune