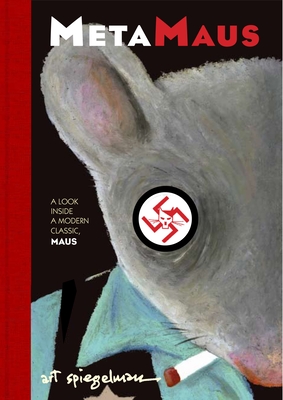 Visually and emotionally rich, MetaMaus is as groundbreaking as the masterpiece whose creation it reveals.

In the pages of MetaMaus, Art Spiegelman re-enters the Pulitzer prize–winning Maus, the modern classic that has altered how we see literature, comics, and the Holocaust ever since it was first published twenty-five years ago.

He probes the questions that Maus most often evokes—Why the Holocaust? Why mice? Why comics?—and gives us a new and essential work about the creative process.

MetaMaus includes a bonus DVD-R that provides a digitized reference copy of The Complete Maus linked to a deep archive of audio interviews with his survivor father, historical documents, and a wealth of Spiegelman’s private notebooks and sketches.

Compelling and intimate, MetaMaus is poised to become a classic in its own right.

ART SPIEGELMAN is one of the world’s most admired and beloved comic artists, best known for his Pulitzer Prize-winning Holocaust narrative, Maus. Born in Stockholm in 1948, Spiegelman began studying cartooning in high school and drawing professionally at age sixteen. He studied art and philosophy at Harpur College before joining the underground comics movement in the 1960s. Spiegelman taught history and the aesthetics of comics at the School of Visual Arts in New York from 1979 to 1986, and in 1980 he founded RAW, the acclaimed avant-garde comics magazine, with his wife, Françoise Mouly. Honors Spiegelman has received include induction into the Will Eisner Hall of Fame and the Art Director’s Club Hall of Fame. In 2005, he was named one of Time magazine’s 100 Most Influential People. He was made an Officier de l’Ordre des Arts et des Lettres in 2007, and in 2011 he was awarded the Grand Prix at the Angoulême International Comics Festival. In 2015, he was elected to the American Academy of Arts and Letters, and in 2018 he became the first comic artist to receive the Edward MacDowell Medal. His art has been exhibited at museums throughout the world, including the Pompidou Center in Paris, the Ludwig Museum in Cologne, the Vancouver Art Gallery, the Jewish Museum in New York City, and the Los Angeles Museum of Contemporary Art.

“Richly rewarding…The book also serves as a master class on the making and reading of comics…The last frame encapsulates in one single moment the artfulness behind the tale we’ve just read, and the uneasy combination of filial pride and anger that flowed through Maus and flows through Metamaus as well.” –The New York Times Book Review

“Why the Holocaust? Why mice? Why comics? Spiegelman answers intelligently, articulately, and with a high degree of psychological and aesthetic penetration.” –Booklist, starred review

“As a floor plan for endless exploration, it is the Haus That “Maus” Built…Pick any page and gaze. The windows into these stories about the story are to be found at every turn, filling the space with insightful light.” –Washington Post’s Comic Riffs

“Art Spiegelman has done more than any other writer of the last few decades to change our understanding of the way stories about the Holocaust can be written…MetaMaus is a profound meditation on the meaning of sources and the uses we make of them.” –The New Republic

“A fascinating meditation on art, writing, and one of the darkest periods in human history.” –The Atlantic

“Sure to breed excitement.” –Library Journal

“Mr. Spiegelman’s new book, MetaMaus, functions as a kind of artist’s scrapbook, chapbook, photo album and storage trunk. Packed with more extras than a new ‘Transformers’ DVD, it’s a look back at Maus and its complicated composition and reception…Mr. Spiegelman is a witty and testy raconteur, and Ms. Chute knows a good deal about comics and she pulls good things from him…Spiegelman is charismatic, and the photographs of him sprinkled throughout are pretty delightful.” –New York Times

“Few books have made as much impact as Maus has. MetaMaus explores this impact, as well as providing some of the original notebook material on the graphic novels…[contains] the single most powerful graphic representation of the effects of the Holocaust…If you are serious about comics or the Holocaust, this book should be on your shelf.” –San Francisco Book Review

“Spiegelman is well-spoken and insightful, and is one of those rare creators who can talk coherently about his own work and process…MetaMaus is thoroughly illustrated with excerpts from Spiegelman's sketchbook, from the original source materials he used when creating his book, and news clippings and other ephemera from the books' storied history…Gripping and smart.” –Cory Doctorow, BoingBoing

“Each page is more beautiful than the next…you’ll find yourself as engrossed in it as you were in Maus.” –Jewish Book Council Blog

“MetaMaus is an intriguing look into the guts of a massive artistic-historical project. With its visual, textual and historical components, the book untangles the tight narrative and visual knots into which the medium, the message and the process of ‘Maus’ are tied. With grist to millers of either ‘Maus,’ Spiegelman or both, it is a must-have item.” –Forward

“Like a director's commentary track, the new MetaMaus provides a kind of behind-the-scenes ‘Inside Maus’ that rewards us with insights this reviewer, for one, was too blown away to perceive the first time around…It is nothing less than a treatise on the rhythm and grammar of comics storytelling. The visual vocabulary he utilizes turns out to be more ingenious than you (or I, at least) ever suspected.” –Barnes and Noble review

“MetaMaus will leave even the most ardent admirers of Maus newly in awe of its author's creative courage, ingenuity and stamina.” –San Francisco Chronicle

“When I heard that Pantheon was putting out a commemorative book, I kept forgetting what it was called: was it MegaMaus or MetaMaus? The book, MetaMaus, published this month, is actually both: mega meta…If Maus has been a touchstone for you over the last decades, you have a new way to understand this moving and revolutionary book.” –Studio 360 “Staff Pick”

“If you love Maus, this is the book for you; it’s practically a must-have.” –Comic Book Bin

“What do you get for the classic graphic novel that has everything? MetaMaus is the answer… It’s an amazing package, one certainly worthy of awards consideration.” –Comics Waiting Room

“MetaMaus is so much more than a companion; it is a true work of genius art and design…This is a companion in the truest terms, a work of art that leaves no stone unturned, or allows for any doubt or question, and for casual readers of the Pulitzer winning book to the most intense of academics or comic book aficionados, it’s a real boon.” –ComicBuzz.com

“The three longest chapters provide nuanced and richly illustrated answers to the questions every reader has probably asked: "Why the Holocaust?" "Why mice?" and "Why comics?" Chute is a skilled and knowledgeable interviewer, Spiegelman a witty, introspective subject, so the process yields insightful observations on the nature of comics, the relationship between reality and narrative, the dynamics of families, and the Holocaust itself.” –Minneapolis Star-Tribune

“a beautiful book, both in visuals and themes, as the writer and artist is interviewed by Hillary Chute about the book that will not die, that he cannot escape, that he wishes would’ve been discovered only after 25 years after his death instead of being talked about for 25 years straight…mind-blowing.” –Bookgasm.com

“A rich, provocative and visually intriguing work of art, memoir and literary history…eye-catching and highly kinetic…a rare opportunity to witness for ourselves how a masterpiece is conceived and comes into existence.” –Jewish Journal gift guide

“A treasure trove, a wonderful way to dive as deeply into this seminal work as you wish…Maus is one of the very few [books] that can live up to this scrutiny, where the creation is strong enough and so thematically rich as to stand up to the examination, and the artist still has new insight to provide.” –ComicsWorthReading.com

“For the past sixty years, Holocaust survivors have expressed their stories in writing. However, few have revolutionized the way people looked at the Holocaust as much as Maus. In his new autobiography, MetaMaus, Spiegelman takes the reader through the inception, process, and completion of his innovative graphic narrative...perhaps the most enchanting and captivating part of this autobiography is the artwork that enhances each page. The book is filled with Spiegelman’s rough sketches, inspirations, previous work, and even family photos.” –Jewish Book World

“A fascinating look into how art and history are made.” –Sacramento News & Review

“I found myself repeatedly surprised, even shocked, by new information regarding a book I felt pretty confident I knew a lot about already…If anyone wants to argue about the ideal form of books about comics, I think Spiegelman has offered a hell of an opening argument with MetaMaus.” –Comic Book Resources

“I found myself repeatedly surprised, even shocked, by new information regarding a book I felt pretty confident I knew a lot about already…If anyone wants to argue about the ideal form of books about comics, I think Spiegelman has offered a hell of an opening argument with MetaMaus.” –Comic Book Resources

“At the risk of ruffling Donald's feathers, it could be argued that Maus, Art Spiegelman's aching Holocaust tale, is as compelling a comics creation as the best of Mickey. MetaMaus details the back story and making of Spiegelman's masterpiece, now 25 years old, and as an invaluable bonus it moves the entire saga onto interactive DVD, with hyperlinked audio commentary, voice recordings of Spiegelman's father, working sketches and essays.” –NPR.org

“The final component of his now legendary Maus epic and a fascinating look into the creative journey Spiegelman undertook to bring it all to light.” –Critical Mob, Critical Books of 2001

“Contains a wealth of extra material. In addition to the many photos, sketches and art samples throughout the book, an accompanying enhanced DVD contains thousands of sketches, video footage of Auschwitz, an archive of illustrated pamphlets by Polish camp survivors, audio recordings of Spiegelman’s interviews with his late father and—most impressively—the entirety of Maus in an annotated and searchable digital format…It was a comic about horror and survival, and if it had never been we would be all the poorer for its absence.” –New City

“The 300-page full-color hardback and companion DVD abound with source materials…The title transcends footnote: MetaMaus is a work of criticism in itself, providing not only notes on process and sources, but considering the entirety of a family, and the thinking of influences of an artist now and at the time the work was created.” –Art in America Magazine

“Opens previously unseen doors in Spiegelman’s iconic text…a pleasure to dip into. Throw in that DVD copy of The Complete Maus, and this truly is the only version of Spiegelman’s graphic memoir that you should ever need. If only we treated all our modern classics so well.” –Culture Mob