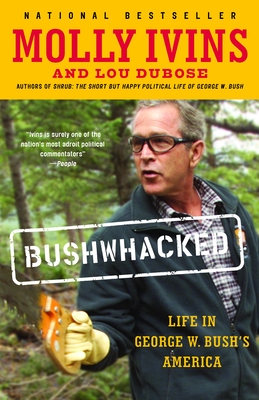 A simultaneously rollicking and sobering indictment of the policies of President George W. Bush, Bushwhacked chronicles the destructive impact of the Bush administration on the very people who put him in the White House in the first place. Here are the ties that connected Bush to Enron, yes, but here, too, is the story of the woman who walks six miles to the unemployment office daily, wondering what happened to the economic security Bush promised. Here are reports on failed nation-building missions in Kabul and Baghdad. Here, too, the story of a rancher who has fallen prey to a Bush-Cheney interior department that is perhaps a wee bit too cozy with the oil industry. Bushwhacked is highly original and entirely thought-provoking—essential reading for anyone living in George W. Bush's America.

Molly Ivins’s column is syndicated to more than three hundred newspapers from Anchorage to Miami. A three-time Pulitzer Prize finalist, she is the former co-editor of The Texas Observer and the former Rocky Mountain bureau chief for The New York Times. Her freelance work has appeared in Esquire, The Atlantic Monthly, The New York Times Magazine, The Nation, Harper’s Magazine, and other publications. She has a B.A. from Smith College and a master’s in journalism from Columbia University. Her first book, Molly Ivins Can’t Say That, Can She?, spent more than twelve months on the New York Times bestseller list.

Lou Dubose has worked as a journalist in Texas for twenty years. He has been editor of The Texas Observer and politics editor of The Austin Chronicle, and is the co-author of Boy Genius: Karl Rove, the Brains Behind the Remarkable Political Triumph of George W. Bush. His freelance work has appeared in The Nation, Texas Monthly, The Washington Post, the Toronto Globe and Mail, the Liberty, Texas, Vindicator, and other publications. He is currently working on a book about Tom Delay. He lives with his wife, Jeanne Goka, in Austin.

“Ivins is surely one of the nation’s most adroit political commentators.” —People

“A sprightly catalogue of every destructive policy decision the Bushies have made in their first two-and-a-half years. . . . Sure to delight the president’s critics and madden his fans.” —The Washington Post Book World

“Ivins and Dubose are worthy heirs of the honorable tradition of muckraking.” —Paul Krugman, The New York Review of Books

“A thorough (and thoroughly researched) condemnation of our 43rd president's domestic policy. . . . The intensely individual stories make this much more than a tart tongue-lashing. . . . Illuminating reading.” —Austin American-Statesman U.S.