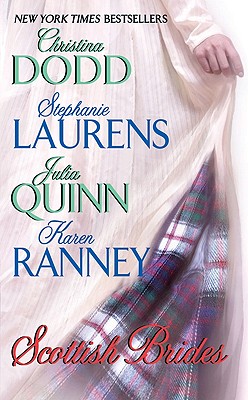 A land of legend and wild beauty - of clans, lairds, honour, and passion - Scotland forever stirs the soul of romance. Now, in one incomparable volume, four of Avon Romance′s bestselling authors present stirring tales of hearts won and weddings to be, featuring a quartet of unforgettable heroines about to discover the rapture of love in a world as untamed as the men they will one day marry

New York Times bestselling author CHRISTINA DODD builds worlds filled with suspense, romance, and adventure, and creates the most distinctive characters in fiction today. Her fifty novels have been translated into twenty-five languages, featured by Doubleday Book Club, recorded on Books on Tape for the Blind, won Romance Writers of America’s Golden Heart and RITA Awards, and been called the year's best by Library Journal. Dodd herself has been a clue in the Los Angeles Times crossword puzzle.

#1 New York Times bestselling author Stephanie Laurens began writing as an escape from the dry world of professional science, a hobby that quickly became a career. Her novels set in Regency England have captivated readers around the globe, making her one of the romance world's most beloved and popular authors.

Karen Ranney wanted to be a writer from the time she was five years old and filled her Big Chief tablet with stories. People in stories did amazing things and she was too shy to do anything amazing. Years spent in Japan, Paris, and Italy, however, not only fueled her imagination but proved she wasn't that shy after all.

Now a New York Times and USA Today bestseller, she prefers to keep her adventures between the covers of her books. Karen lives in San Antonio, Texas.