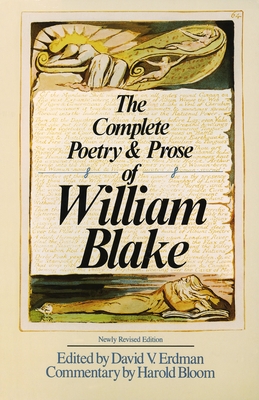 Since its first publication in 1965, this edition  has been widely hailed as the best available text  of Blake's poetry and prose. Now revised, if  includes up-to-date work on variants, chronology of  poems and critical commentary by Harold Bloom.

An  "Approved Edition" of the Center for Scholarly  Editions of the Modern Language Association.

WILLIAM BLAKE was born in London in 1757. He was educated at home and then worked as an apprentice to the engraver James Basire before joining the Royal Academy in 1779. In 1782 he married Catherine Boucher, and a year later began his career as a poet when he published Poetical Sketches. This was followed by Songs of Innocence (1789) and Songs of Experience (1794), which he also designed and engraved. His other major literary works include The Book of Thel (1789), The Marriage of Heaven and Hell (c. 1793), Milton (1804–8), and Jerusalem (1804–20). He produced many paintings and engravings during his lifetime. Blake died in 1827.

David V. Erdman was an American literary critic, editor, and Professor Emeritus of English at the State University of New York at Stony Brook. Professor Erdman established his reputation as a William Blake scholar. Erdman is the author of Blake: Prophet against Empire, The Poems of William Blake, The Illuminated Blake: All of William Blake's Illuminated Works with a Plate-by-Plate Commentary, and more.

Harold Bloom is a Sterling Professor of Humanities at Yale University and a former Charles Eliot Norton Professor at Harvard. His more than forty books include The Anxiety of Influence, Shakespeare: The Invention of the Human, The Western Canon, and The American Religion. He is a MacArthur Prize Fellow, a member of the American Academy of Arts and Letters, and the recipient of many awards and honorary degrees, including the Academy’s Gold Medal for Belles Lettres and Criticism, the Catalonia International Prize, and the Alfonso Reyes International Prize of Mexico. He lives in New Haven, Connecticut, and in New York City.