Final Exit (Third Edition): The Practicalities of Self-Deliverance and Assisted Suicide for the Dying (Paperback) 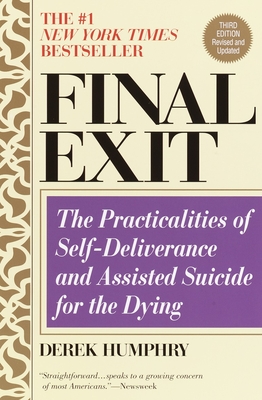 The original publication of Final Exit stunned the nation by offering people with terminal illness a choice on how--and when--to end their suffering. It helped thousands by giving clear instructions to doctors, nurses, and families on how to handle a patient’s request for euthanasia.

In the wake of court cases and legislative mandates, this revised and updated third edition goes far beyond the original to provide new information about the legality of euthanasia and assisted suicide, and a thoughtful examination of the personal issues involved. It has become the essential source to help loved ones and supportive doctors remain within existing laws and keep a person’s dying intimate, private, and dignified.

With deep compassion and sensitivity, it spells out why a living will may not be sufficient to have a person’s wishes carried out--and what document is a better alternative. It updates where to get proper drugs and exactly how to carry out the quickest, most peaceful way to make a final exit. Finally, it gently talks to a person considering self-deliverance about alternatives, planning, and the means to make every death a "good death" at our time of greatest need.

Derek Humphry, president of the Euthanasia Research & Guidance Organization (ERGO!) and founder and executive director (1980–1992) of the National Hemlock Society, was a newspaper reporter for 35 years, working for many British journals. During his 14 years with the London Sunday Times, he began to write books on racial problems, law enforcement, and civil liberties. In 1978 he moved to the United States to work for the Los Angeles Times. The international acceptance of the story of his first wife’s death, Jean’s Way, now considered a classic account of rational assisted suicide, launched his campaign for the right to lawful physician aid in dying. In 1980 in Los Angeles he and friends formed the Hemlock Society, the first such group in North America. From 1988 to 1990, Derek Humphry was president of the World Federation of Right to Die Societies. He lives near Eugene, Oregon.

“Until there is a law which would allow physicians to help people who want a Final Exit, here is Derek Humphry’s book, fittingly named, to guide them.”
--Betty Rollin, author of First, You Cry and Last Wish