The Big Con: The Story of the Confidence Man (Paperback) 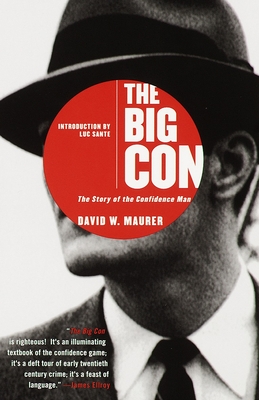 The classic 1940 study of con men and con games that Luc Sante in Salon called “a bonanza of wild but credible stories, told concisely with deadpan humor, as sly and rich in atmosphere as anything this side of Mark Twain.”

“Of all the grifters, the confidence man is the aristocrat,” wrote David Maurer, a proposition he definitely proved in The Big Con, one of the most colorful, well-researched, and entertaining works of criminology ever written. A professor of linguistics who specialized in underworld argot, Maurer won the trust of hundreds of swindlers, who let him in on not simply their language but their folkways and the astonishingly complex and elaborate schemes whereby unsuspecting marks, hooked by their own greed and dishonesty, were “taken off” – i.e. cheated—of thousands upon thousands of dollars.

The Big Con is a treasure trove of American lingo (the write, the rag, the payoff, ropers, shills, the cold poke, the convincer, to put on the send) and indelible characters (Yellow Kid Weil, Barney the Patch, the Seldom Seen Kid, Limehouse Chappie, Larry the Lug). It served as the source for the Oscar-winning film The Sting.

David W. Maurer was a professor of Linguistics at the University of Louisville until his death in 1981. His other books include Whiz Mob and Kentucky Moonshine.

Luc Sante is the author of Low Life, an acclaimed account of New York’s underworld.; the memoir Factory of Facts; and Evidence.