Helga's Diary: A Young Girl's Account of Life in a Concentration Camp (Paperback) 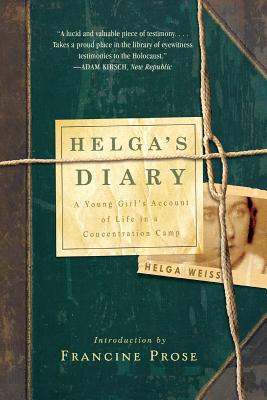 "A sacred reminder of what so many millions suffered, and only a few survived." —Adam Kirsch, New Republic

In 1939, Helga Weiss was a young Jewish schoolgirl in Prague. As she endured the first waves of the Nazi invasion, she began to document her experiences in a diary. During her internment at the concentration camp of Terezín, Helga’s uncle hid her diary in a brick wall. Of the 15,000 children brought to Terezín and deported to Auschwitz, there were only one hundred survivors. Helga was one of them. Miraculously, she was able to recover her diary from its hiding place after the war. These pages reveal Helga’s powerful story through her own words and illustrations. Includes a special interview with Helga by translator Neil Bermel.

Helga Weiss was born in Prague in 1929. After surviving the Holocaust and the Second World War, Helga returned to Prague, studied at the Academy of Fine Arts, and became an artist. She has two children, three grandchildren, and lives to this day in the apartment where she was born.

Francine Prose is the author of sixteen books of fiction, including Blue Angel, which was a finalist for the National Book Award. Among her most recent works of nonfiction is the highly acclaimed Anne Frank: The Book, The Life, The Afterlife. A former president of PEN American Center, she lives in New York City.

Describes the unfolding horrors of the Holocaust as seen through the eyes of a young girl. The young Helga responds to hardship with indignation and defiance, maintaining a sharp sense of observation while trying to make sense of the upheaval and suffering she sees.
— New Yorker

She is one of few children to survive Auschwitz. Even with all the books that have been published, this one, with its immediacy and child’s point of view, is hard to forget.
— Jewish Week

Resounds with a ferocious will to endure conditions of astonishing cruelty.
— David Casarani - New Statesman

Helga’s Diary is another moving testimony to the courage, endurance and painfully premature maturity of the young victims of the Holocaust.

A breathtaking account…a chilling testament to the tragedy of the Holocaust.
— Publishers Weekly

At times the struggle of this young girl in the face of evil becomes so real that you’ll notice yourself adjusting your blanket and thermostat right along with her as she shivers in the worst of conditions.
— The Daily Beast

What's startling, throughout, is the resilience with which her buoyant spirit keeps bobbing up past the hardships, indignities, and cruelties of her captors.
— Francine Prose