Gorbachev: His Life and Times (Hardcover) 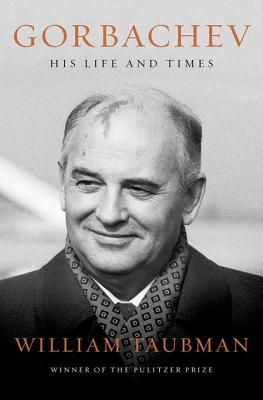 The definitive biography of the transformational world leader by the Pulitzer Prize–winning author of Khrushchev.

When Mikhail Gorbachev became the leader of the Soviet Union in 1985, the USSR was one of the world’s two superpowers. By 1989, his liberal policies of perestroika and glasnost had permanently transformed Soviet Communism, and had made enemies of radicals on the right and left. By 1990 he, more than anyone else, had ended the Cold War, and in 1991, after barely escaping from a coup attempt, he unintentionally presided over the collapse of the Soviet Union he had tried to save. In the first comprehensive biography of the final Soviet leader, William Taubman shows how a peasant boy became the Soviet system’s gravedigger, how he clambered to the top of a system designed to keep people like him down, how he found common ground with America’s arch-conservative president Ronald Reagan, and how he permitted the USSR and its East European empire to break apart without using force to preserve them. Throughout, Taubman portrays the many sides of Gorbachev’s unique character that, by Gorbachev’s own admission, make him “difficult to understand.” Was he in fact a truly great leader, or was he brought low in the end by his own shortcomings, as well as by the unyielding forces he faced?

Drawing on interviews with Gorbachev himself, transcripts and documents from the Russian archives, and interviews with Kremlin aides and adversaries, as well as foreign leaders, Taubman’s intensely personal portrait extends to Gorbachev’s remarkable marriage to a woman he deeply loved, and to the family that they raised together. Nuanced and poignant, yet unsparing and honest, this sweeping account has all the amplitude of a great Russian novel.

William Taubman is the Bertrand Snell Professor of Political Science Emeritus at Amherst College. His biography, Khrushchev: The Man and His Era, won the Pulitzer Prize and the National Book Critics Circle Award. He lives in Amherst, Massachusetts.

A meticulously researched, clear-eyed volume that will undoubtedly stand for years as the definitive account of the Soviet Union's last ruler.
— Max Boot - Wall Street Journal

Magisterial....William Taubman has written a fascinating, perceptive, and compelling account of the life of a brilliant, driven, but flawed leader.
— Nick Burns - Boston Globe

A superbly researched story of a politician of such decency as to seem, in our more pessimistic, darker moment, almost beyond imagining.
— The New Yorker

William Taubman's extraordinary new biography, Gorbachev: His Life and Times, is fly-on-the-wall history….A riveting page-turner….his book is anything but a solemn academic tome. It's gripping.

Sympathetic in his judgments yet clear-eyed in his criticisms, Taubman has rendered Gorbachev in a vast and complex portrait that will be the standard for years to come.
— Michael O'Donnell - Washington Monthly

[Taubman] applies a Tolstoyan lens to Russia’s recent history and displays particular sensitivity in his assessment of a life that would prove richer than politics.
— The Economist

This will be one of the two or three best books of the year, compulsively readable, fun, and informative all at once.
— Tyler Cowan

[A] deeply penetrating history and engrossing psychological study....Taubman draws on a wide range of sources and interviews...to render every major development of the former Soviet leader’s six-year tenure with depth and completeness.
— Robert Legvold - Foreign Affairs

Nobody before Taubman has achieved an in-depth psychological portrait…this monumental biography will become the standard personal portrait. Taubman has charmed more out of [Gorbachev] than any of his subordinates ever managed to.
— Robert Service - Literary Review

William Taubman has now done for Gorbachev what he had previously done for Khrushchev, giving us the full life deeply grounded in the Soviet and Russian archives, here with the added benefit of Gorbachev’s complete cooperation. Perhaps a hundred years from now, when our perspective on Russia’s role in the world has further clarified, another biography will be needed. For now, however, Gorbachev is the closest thing to the final word that history allows.
— Joseph Ellis, author of Founding Brothers: The Revolutionary Generation

This is a meticulously researched, carefully nuanced, and immensely readable biography of a remarkable, but insufficiently understood, twentieth-century political leader. Taubman’s book is destined to remain the fullest and most authoritative life of Gorbachev for years to come.
— Archie Brown, author of The Myth of the Strong Leader and The Rise and Fall of Communism

Comprehensive, judicious, utterly absorbing, William Taubman’s Gorbachev: His Life and Times gives us rare insight into the man who changed his country and world politics. A model of careful research and compelling narrative skill, this biography is destined to become a modern classic.

I have had the privilege of knowing many of the great men and women who brought momentous change to the last part of the twentieth century. My friend Mikhail Gorbachev was outstanding among them. So this biography, especially with its attention to his early formative years, is a great addition to our understanding of a key historical period.
— George P. Shultz

William Taubman has written a remarkable book. He has, at once, captured the complexity of the man, while making Gorbachev’s times—both frightening and hopeful—come alive. The history of the USSR and the world would have been far different if Mikhail Gorbachev had not come to power.
— Susan Eisenhower

A rich and revealing portrait and a thoroughly engrossing read, Taubman’s penetrating examination of Gorbachev’s rise and fall undermines the argument that Russia can be ruled only by dictators and autocrats--while also exposing how steeply the odds are stacked against any efforts at real reform.
— John Beyrle, Former U.S. Ambassador to Russia, 2008-2011

Remarkably, the two most memorable leaders of the Soviet Union in the last half of its existence now have the same superb biographer. William Taubman's Gorbachev, like his Khrushchev, is an extraordinary achievement, full of new information, filled with shrewd judgments, a two-in-a-row triumph in the writing of great lives.

William Taubman’s biography of Mikhail Gorbachev is a much needed, uniquely sourced account of the life, work, and times of the man who critically shaped a peaceful end to the Cold War and great Soviet experiment. Based on a unique blend of archival sources, personal memoirs, and a not-to-be-repeated set of interviews with key actors, Taubman’s superbly written portrait will become the essential and standard work on his subject and a primary source for any future historians of this period.
— James F. Collins, Former U.S. Ambassador to Moscow, 1997-2001