The End of Inequality: One Person, One Vote and the Transformation of American Politics (Paperback) 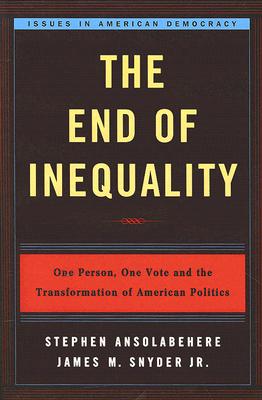 The End of Inequality takes a close look at Baker v. Carr, the pivotal Supreme Court case that established the right to equal representation in state legislatures for every American.

Stephen Ansolabehere and James Snyder detail the history of “one person, one vote” in American political theory and politics, and tell the story of the people—presidents, legislators, judges, lawyers, and ordinary citizens—who fought the battles to define this fundamental feature of American democracy.

Stephen Ansolabehere is Professor of Government at Harvard University. He is the coauthor of The Media Game and Going Negative: How Political Advertising Alienates and Polarizes the American Electorate, which was awarded the Goldsmith Book Prize. His articles have appeared in The American Political Science Review, The Journal of Politics, Legislative Studies Quarterly, and Public Opinion Quarterly. He has been awarded fellowships by the Carnegie Corporation Fellowship and the Hoover Institution. He served as a co-director of the CalTech/MIT Voting Project, established in the wake of the 2000 presidential election to evaluate the current state of the reliability and uniformity of U.S. voting systems and propose uniform guidelines and requirements for reliable voting and performance. Ansolabehere’s research focuses on public opinion, elections, mass media, and representation.

James M. Snyder Jr. is the Arthur and Ruth Sloan Professor of Political Science and Economics at MIT. He has published nearly 70 articles in peer-reviewed journals and edited volumes.