The Queen of the Damned (Vampire Chronicles #3) (Hardcover) 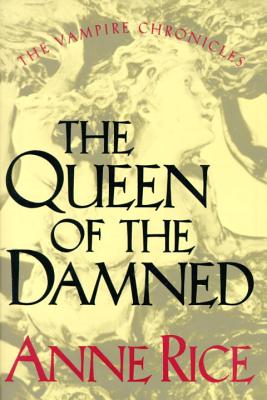 This is book number 3 in the Vampire Chronicles series.

In 1976, a uniquely seductive world of vampires was unveiled in the now-classic Interview with the Vampire ... in 1985, a wild and voluptous voice spoke to us, telling the story of The Vampire Lestat. Anne Rice continues her extraordinary Vampire Chronicles in a feat of mesmeric storytelling, a chillingly hypnotic entertainment in which the oldest and most powerful forces of the night are unleashed on an unsuspecting world.

- The rock star known as Vampire Lestat, worshipped by millions of spellbound fans, prepares for a concert in San Francisco.  Among the audience--pilgrims in a blind swoon of adoration--are hundreds of vampires, creatures who see Lestat as a "greedy fiend risking the secret prosperity of all his kind just to be loved and seen by mortals," fiends themselves who hate Lestat's power and who are determined to destroy him . . .

- The sleep of certain men and women--vampires and mortals scattered around the world--is haunted by a vivid, mysterious dream: of twins with fiery red hair and piercing green eyes who suffer an unspeakable tragedy.  It is a dream that slowly, tauntingly reveals its meaning to the dreamers as they make their way toward each other--some to be destroyed on the journey, some to face an even more terrifying fate at journey's end . . .

- Akasha--Queen of the Damned, mother of all vampires, rises after a 6,000 year sleep and puts into motion a heinous plan to "save" mankind from itself and make "all myths of the world real" by elevating herself and her chosen son/lover to the level of the gods: "I am the fulfillment and I shall from this moment be the cause" . . .

These narrative threads wind sinuously across a vast, richly detailed tapestry of the violent, sensual world of vampirism, taking us back 6,000 years to its beginnings.  As the stories of the "first brood" of blood drinkers are revealed, we are swept across the ages, from Egypt to South America to the Himalayas to all the shrouded corners of the globe where vampires have left their mark. Vampires are created--mortals succumbing to the sensation of "being enptied, of being devoured, of being nothing." Vampires are destroyed.  Dark rituals are performed--the rituals of ancient creatures prowling the modern world.  And, finally, we are brought to a moment in the twentieth century when, in an astonishing climax, the fate of the living dead--and perhaps of the living, all the living--will be decided.

“With The Queen of the Damned, Anne Rice has created universes within universes, traveling back in time as far as ancient, pre-pyramidic Egypt and journeying from the frozen mountain peaks of Nepal to the crowded, sweating streets of southern Florida.”—Los Angeles Times

“Imaginative . . . intelligently written . . . This is popular fiction of the highest order.”—USA Today