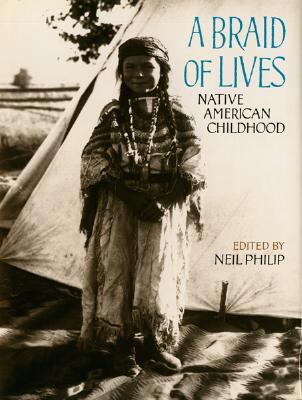 By Neil Philip
$20.00
This item is backordered and not currently available. Please contact us for an estimated availability date.

This moving collection of first-person narratives celebrates the individuality and variety of the Native American experience. Men and women representing many Native American groups speak about childhood and growing up—games and rites of passage, education and learning, tradition and change. This companion volume to Neil Philip’s acclaimed IN A SACRED MANNER I LIVE is touching and dramatic, easily accessible to young readers, who will identify with its celebration of universal childhood experiences. Introduction, indexes of speakers/writers and Indian nations, suggestions for further reading, source notes.

Neil Philip is a noted folklorist and anthologist who has written several books on Native American and multicultural themes for Clarion, including IN A SACRED MANNER I LIVE, which was named both a YALSA Best Book for Young Adults and a New York Times Notable Book of the Year. He lives in England.

"This is an excellent choice for curriculum support and brief read-aloud material" Booklist, ALA

Author of In a Sacred Manner I Live: Native American Wisdom, an ALA Best Book for Young Adults 1998, Philip states in his introduction to this collection that "one constant in the varied cultures of the Indian nations is love of children." Combining period photographs with the authentic reminiscences of Native Americans, among them Charles Eastman and Black Elk, Philip seeks to portray a wide range of childhood experiences. Native people speak of their favorite childhood pastimes, their desire to emulate their elders , the joys and terrors of their early lives, and their connections with nature and the supernatural. Some speak haltingly, almost incoherently; others speak elegantly with the widsom of age.
Some of the material is likely to seem tiresome to teens, who, regardless of their heritage or their respect for their elders, are unlikely to be impressed by stories of how much harder things were in the old days. Nevertheless Philip has collected several sprightly and fascinating stories. A tale told by an anonymous teller relates how Apache parents recruited elderly strangers to terrify their children when they misbehaved, and Mourning Dove reminisces about her desire to outride and outrun the boys. Equally enjoyable is Lame Deer's description of how, at age nine, he decided to pierce his little sister's ears and thereby lost his favorite pony. Particularly heart wrenching is Zitkala-Sa's story of her first days in the white man's school. This book should appeal to young adults with a strong interest in traditional Native American culture.
VOYA (Voice of Youth Advocates)

A large selection of first-person accounts of growing up Native American in the nineteenth and early-twentienth centuries gives an intimate view of tribal life and culture, including three entries on the Carlisle School.
Horn Book Guide —