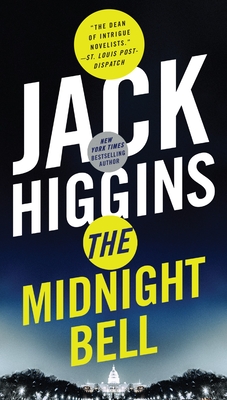 This is book number 22 in the Sean Dillon series.

“The bell rings at midnight, as death requires it.”—Irish proverb

In Ulster, Northern Ireland, a petty criminal kills a woman in a drunken car crash. Her sons swear revenge. In London, Sean Dillon and his colleagues in the “Prime Minister's private army,” fresh from defeating a deadly al-Qaeda operation, receive a warning: You may think you have weakened us, but you have only made us stronger. In Washington, D.C., a special projects director with the CIA, frustrated at not getting permission from the President for his daring anti-terrorism plan, decides to put it in motion anyway. He knows he's right—the nation will thank him later.

Soon, the ripples from these events will meet and overlap, creating havoc in their wake. Desperate men will act, secrets will be revealed—and the midnight bell will toll.

Jack Higgins lives on Jersey in the Channel Islands. The author of dozens of bestsellers, most famously The Eagle Has Landed, he served three years with the Royal Horse Guards in Eastern Europe during the Cold War, and subsequently was a circus roustabout, a factory worker, a truck driver, and a laborer before entering college at age 27. He holds degrees in sociology, social psychology, and economics, and a doctorate in media. A fellow of the Royal Society of Arts, he is an expert scuba diver and marksman.

Praise for the Sean Dillon series

“Jack Higgins is one of the best-selling authors of popular fiction in the world, often considered the architect of the modern thriller, Rain on the Dead is sure to top the bestseller lists.”—The Huffington Post

“Higgins is an author with the creative power to hook the reader and keep them forever because of his terrific tales. There are many villains out there, but Higgins is by far the greatest at bringing to life the best and worst of them all...Avid Higgins readers will enjoy the new package of thrills and chills, because this iconic suspense/thriller writer has most definitely done it again!”—Suspense Magazine

“Rain on the Dead is another solid entry in the Sean Dillon series [with] the usual satisfying mixture of action and character. Higgins is a veteran of the genre.”—Booklist

“Jack Higgins has written some of the best suspense fiction of the past fifty years.” —The San Diego Union-Tribune

“When it comes to thriller writers, one name stands well above the crowd—Jack Higgins.”—Associated Press