The Rise of Israel: A History of a Revolutionary State (Israeli History) (Paperback) 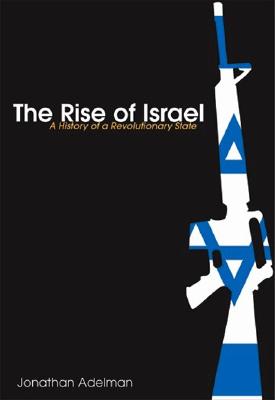 By Jonathan Adelman
This item is backordered and not currently available. Please contact us for an estimated availability date.

The state of Israel is one of the most controversial countries in the world. Yet, its unique creation and rise to power in 1948 has not been adequately explained either by its friends (mainstream Zionists) nor by its detractors (Arabists and post-Zionists).

Using a variety of comparative methodologies; from contrasting the Jewish state to other minorities in the Ottoman Turkish Empire to the rise of the four Tigers in Asia to newly independent countries and revolutionary socialist countries in Europe and Asia, Jonathan Adelman examines how Israel has gained the strength to overcome great obstacles and become a serious regional power in the Middle East by 2007.

how the creation of Israel is strikingly different from that of most new states, as undetermined by the major structural forces in the world in the twentieth century how voluntarist forces, those of individual choice, will and strategy, played a major role in its creation and success in-depth analysis of the creation of a revolutionary party, government, army and secret police as critical to the success of the socialist revolution (1881-1977) the enormity of the forces aligned against the state; from major international and religious organizations representing billions of people, international reluctance to helping Israel in crisis, and internal Israeli and Jewish issues the tremendous impact of revolutionary (socialist and semi-capitalist nationalist) factors in giving Israel the strength to survive and become a significant regional power over time.

Jonathan Adelman provides a fresh perspective to view one of the most controversial states in the world and avoids the highly charged ideological descriptions that often plague such discussions. Understanding the rise of Israel, a central state in the region, helps to explain a great deal about the Middle East today.