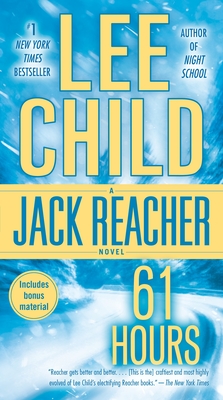 This is book number 14 in the Jack Reacher series.

“Reacher gets better and better. . . . [This is the] craftiest and most highly evolved of Lee Child’s electrifying Reacher books.”—Janet Maslin, The New York Times

A bus crashes in a savage snowstorm and lands Jack Reacher in the middle of a deadly confrontation. In nearby Bolton, South Dakota, one brave woman is standing up for justice in a small town threatened by sinister forces. If she’s going to live long enough to testify, she’ll need help. Because a killer is coming to Bolton, a coldly proficient assassin who never misses.

Reacher’s original plan was to keep on moving. But the next 61 hours will change everything. The secrets are deadlier and his enemies are stronger than he could have guessed—but so is the woman he’ll risk his life to save.

Lee Child is the author of more than two dozen New York Times bestselling Jack Reacher thrillers, with most having reached the #1 position, and the #1 bestselling complete Jack Reacher story collection, No Middle Name. Foreign rights in the Reacher series have sold in one hundred territories. A native of England and a former television director, Lee Child lives in New York City and Wyoming.

“Child is a superb craftsman of suspense, juggling several plots and keeping his herrings well-rouged. . . . Chances are you’ll want to seek out other Reacher adventures the moment you finish.”—Entertainment Weekly

“Masterful . . . a tour-de-force of both structure and suspense.”—The Providence Journal

“Child keeps his foot hard on the throttle. . . . This is Child in top form, but isn’t he always?”—Booklist (starred review)

“Compulsively addictive [with] an explosive climax that will have you tearing out your hair until Reacher’s next appearance.”—The Miami Herald

Praise for the Jack Reacher series

“The truth about Reacher gets better and better. . . . This series [is] utterly addictive.”—Janet Maslin, The New York Times

“Jack Reacher is today’s James Bond, a thriller hero we can’t get enough of. I read every one as soon as it appears.”—Ken Follett

“Reacher is the stuff of myth. . . . One of this century’s most original, tantalizing pop-fiction heroes.”—The Washington Post

“The Reacher novels are easily the best thriller series going.”—NPR

“Reacher is a man for whom the phrase moral compass was invented: His code determines his direction. . . . You need Jack Reacher.”—The Atlantic

“I pick up Jack Reacher when I’m in the mood for someone big to solve my problems.”—Patricia Cornwell

“[A] feverishly thrilling series . . . You can always count on furious action.”—Miami Herald