What Remains of Heaven: A Sebastian St. Cyr Mystery (Paperback) 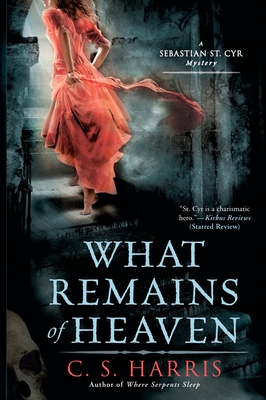 This is book number 5 in the Sebastian St. Cyr Mystery series.

London 1812. When the controversial reform-minded Bishop of London is found bludgeoned to death in an ancient crypt beside the corpse of an unidentified man murdered decades before, Sebastian St. Cyr, Viscount Devlin, reluctantly agrees to investigate. As his search for the killer leads him from the back alleys of Smithfield to the power corridors of Whitehall, Sebastian must confront the well-guarded secrets of his own family's past—and a devastating truth that could ultimately force him to question who—and what—he really is.

C.S. Harris graduated with a degree in Classics before earning a Ph.D. in European history. A scholar of the French Revolution and 19th-century Europe, she has lived in Europe and various far-flung parts of the old British Empire. She now lives in New Orleans with her husband, a retired Army Intelligence Officer, and two daughters.

“A crescendo of suspense and surprise.”—Library Journal (Starred Review)

“Harris crafts her story with the threat of danger, hints of humor, vivid sex scenes, and a conclusion that will make your pulse race.”—The New Orleans Times-Picayune