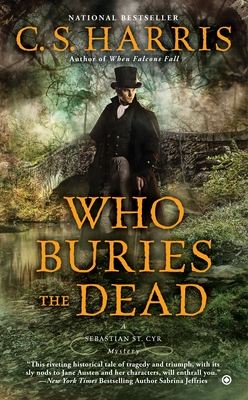 This is book number 10 in the Sebastian St. Cyr Mystery series.

The grisly murder of a West Indies slave owner and the reappearance of a dangerous enemy from Sebastian St. Cyr’s past put C. S. Harris’s “troubled but compelling antihero”* to the ultimate test in this taut, thrilling entrée in the acclaimed, national bestselling historical mystery series.

London, 1813. The decapitation of a wealthy plantation owner at Bloody Bridge draws Sebastian St. Cyr into a macabre and perilous investigation. The discovery near the body of a lead coffin strap bearing the inscription KING CHARLES, 1648 suggests a link between this killing and the beheading of the seventeenth-century monarch. Equally troubling, the victim’s kinship to the current Home Secretary draws the notice of Sebastian’s father-in-law, Lord Jarvis, who will exploit any means to pursue his own clandestine ends.

Working with his wife, Hero, Sebastian amasses a list of suspects who range from an eccentric curiosity collector to the brother of a brilliantly observant spinster named Jane Austen.

But as one murder follows another, it is the connection between the victims and ruthless former army officer Lord Oliphant that raises the stakes. Once, Oliphant nearly destroyed Sebastian in a horrific act of betrayal. Now he poses a threat not only to Sebastian but to everything—and everyone—Sebastian holds dear.

C. S. Harris is the national bestselling author of more than twenty novels, including the Sebastian St. Cyr mysteries; as C. S. Graham, a thriller series coauthored with former intelligence officer Steven Harris; and seven award-winning historical romances written under the name Candice Proctor. A respected scholar with a PhD in nineteenth-century Europe, she is also the author of a nonfiction historical study of the French Revolution. She lives with her husband in New Orleans and has two grown daughters.

“With such well-developed characters, intriguing plot lines, graceful prose, and keen sense of time and place based on solid research, this is historical mystery at its best.”—Booklist*

“Unbearably exciting, filled with historical details, multiple suspects and, unexpectedly, Jane Austen, the reader will not be able to put this down.”—RT Book Reviews

“Harris is one of the best historical mystery writers I’ve read, capturing the reader’s interest and imagination from the first page . . . A most enjoyable read.”—Historical Novel Society