The Limousine Liberal: How an Incendiary Image United the Right and Fractured America (Hardcover) 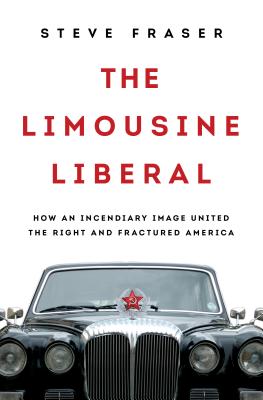 No political image in recent American history has enjoyed the impact of the "limousine liberal." It has managed to mobilize an enduring politics of resentment directed against everything from civil rights to women's liberation, from the war on poverty to environmental regulation. Coined in 1969 by New York City mayoralty candidate Mario Procaccino, the term took aim at what he and his largely white lower middle class and blue collar following considered the repellent hypocrisy of well-heeled types who championed the cause of the poor, especially the black poor, but who had no intention of bearing the costs of their plight. The metaphor zeroed in on liberal elites who preferred to upset rather than defend the status quo not only in race relations, but in the sexual, moral, and religious order and had little interest in looking after the needs of working people.

In The Limousine Liberal, the acclaimed historian Steve Fraser argues that it is impossible to understand American politics without coming to grips with this image, where it originated, why it persists, and where it may be taking us. He reveals that the limousine liberal had existed in all but name long before Procaccino gave it one. From Henry Ford decrying an improbable alliance of Jews, bankers, and Bolsheviks in the 1920s to the Tea Party's vehement hatred of Hillary Clinton, the fear of the limousine liberal has stoked right-wing populism for nearly a century. Today it fuses together disparate elements of the conservative movement. Sunbelt entrepreneurs on the rise, blue collar ethnics and middle classes in decline, heartland evangelicals, and billionaire business dynasts have found common cause, despite their real differences, in shared opposition to liberal elites.

The Limousine Liberal tells an extraordinary story of why the most privileged and powerful elements of American society were indicted as subversives and reveals the reality that undergirds that myth. It goes to the heart of the great political transformation of the postwar era: the rise of the conservative right and the unmaking of the liberal consensus.

Steve Fraser is the author of Every Man a Speculator and Wall Street, among other books, and has written for the Los Angeles Times, the New York Times, and The Nation. He lives in New York City.

"An incisive history of a right-wing metaphor and its effects."—New York Times Book Review Editor's Choice

"[Fraser] writes wonderfully, and his text is studded with insights...[he] has produced a timely tour de force to remind us that limousine liberals are still very much with us--as are the politicians and pundits who portray them as such bogeymen."—Wall Street Journal

"As the historian Steve Fraser demonstrates in his wide-ranging new book, the idea of the 'limousine liberal' has a long and messy history all its own."—New York Times Book Review

"Fraser provides a brisk and entertaining history of limousine liberalism in all its linguistic manifestations, and his book is worth reading for that alone."—New Republic

"Popular history is littered with the corpses of bloated books, written where an essay would have sufficed. Not The Limousine Liberal. There is some wrinkle on every page, and it is essential to anybody, especially those on the left, who does not understand how the populist energies they believe are rightfully theirs have been so completely captured by bigots and strivers."—Vox.com

"This brilliant and mordant book is a useful guide to a much reviled native species, and given the state of today's Democratic Party, its appearance could not be more timely. The author recognizes that there really are limousine liberals--though lately we seem to be paying a lot more attention to a limousine populist--but his larger interest is in demonstrating how rabble rousers for much of our history have used the concept to incite the working classes against progressive change. They did this even before Mario Procaccino coined the term in his unsuccessful 1969 campaign to become mayor of New York City. Fraser is a nimble writer and thinker in whose company there's never a dull or uninformative moment."—Newsday

"A bracing and extremely timely exploration of the roots of right-wing populism, especially relevant in the glare of Donald Trump's unexpected rise."—Booklist

"[A] rich, incisive book...Fraser conveys the ferocity of America's culture wars in his sharp observations, which often cut uncomfortably close to the bone."—Kirkus

"This lucid, often entertaining, genealogy of right-wing populism is necessary background reading for anyone seeking to understand--or just endure--2016."—Barbara Ehrenreich, bestselling author of Nickel and Dimed

"Steve Fraser has produced a fascinating history of the ways liberal elites have been demonized by conservatives seeking to make inroads among white working class voters. Fraser's book is crucial to understanding a dominant theme in American politics that has shaped the conservative movement and has most recently fueled the campaign tactics of Donald Trump."—Thomas Edsall, Columnist, New York Times

"Steve Fraser's The Limousine Liberal is a bracing and illuminating history of right-wing populism in modern America. With fascinating detail and vigorous prose, Fraser deftly shows how class became the dirty little secret of American politics, and how billionaires in work boots have helped to keep it that way. This book is essential reading for anyone who is impatient with the triviality of contemporary public discourse, and who hopes--against all the odds--to revive it."—Jackson Lears, author of Rebirth of a Nation: The Making of Modern America, 1877-1920

"Steve Fraser's The Limousine Liberal is a brilliant analysis of how elites, using both parties, have stunted the kind of real economic democracy and broad prosperity that America needs."—Robert Kuttner, Co-Editor, The American Prospect; Professor, Brandeis University

"Steve Fraser's writing blends the depth and complexity of a scholar, the lively prose of a journalist, and the moral seriousness of a critic. The Limousine Liberal is a penetrating analysis of the resentments aroused by the efforts of affluent liberals to help the disadvantaged, sometimes at the expense of those in the middle. As Fraser brilliantly demonstrates, the resulting ideological backlash explains a great deal about the sorry state of contemporary American politics."—George Scialabba, author of What Are Intellectuals Good For? and For the Republic