Sisters of Mokama: The Pioneering Women Who Brought Hope and Healing to India (Hardcover) 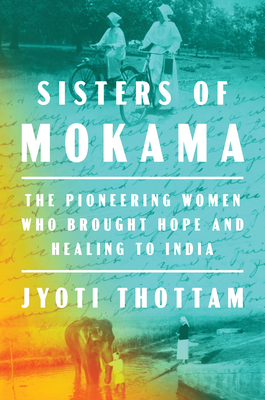 "Sisters of Mokama is proof that faith and courage does move mountains."—Abraham Verghese, author of Cutting for Stone

The never-before-told story of six intrepid Kentucky nuns, their journey to build a hospital in the poorest state in India, and the Indian nurses whose lives would never be the same

New York Times editor Jyoti Thottam’s mother was part of an extraordinary group of Indian women. Born in 1946, a time when few women dared to leave their house without the protection of a man, she left home by herself at just fifteen years old and traveled to Bihar—an impoverished and isolated state in northern India that had been one of the bloodiest regions of Partition—in order to train to be a nurse under the tutelage of the determined and resourceful Appalachian nuns who ran Nazareth Hospital. Like Thottam’s mother’s journey, the hospital was a radical undertaking: it was run almost entirely by women, who insisted on giving the highest possible standard of care to everyone who walked through its doors, regardless of caste or religion.

Fascinated by her mother’s story, Thottam set out to discover the full story of Nazareth Hospital, which had been established in 1947 by six nuns from Kentucky. With no knowledge of Hindi, and the awareness that they would likely never see their families again, the sisters had traveled to the small town of Mokama determined to live up to the pioneer spirit of their order, founded in the rough hills of the Kentucky frontier. A year later, they opened the doors of the hospital; soon they began taking in young Indian women as nursing students, offering them an opportunity that would change their lives. One of those women, of course, was Thottam’s mother.

In Sisters of Mokama, Thottam draws upon twenty years’ worth of research to tell this inspiring story for the first time. She brings to life the hopes, struggles, and accomplishments of these ordinary women—both American and Indian—who succeeded against the odds during the tumult and trauma of the years after World War II and Partition. Pain and loss were everywhere for the women of that time, but the collapse of the old orders provided the women of Nazareth Hospital with an opening—a chance to create for themselves lives that would never have been possible otherwise.

Jyoti Thottam is a senior Opinion editor at The New York Times. Prior to joining the Times, she was a reporter, editor and foreign correspondent. From 2008 to 2012, she was Time’s South Asia Bureau Chief in New Delhi, where she wrote numerous cover stories, including award-winning stories about the Ganges River and the Mumbai terrorist attacks. Born in India, she grew up in Texas and graduated from Yale and Columbia. She lives with her family in Brooklyn.

One of TIME's Must-Read Spring Books for 2022

"I marvel to think of six nuns from Appalachia in the 1940s journeying to India and facing unimaginable dangers to build a hospital that would transform so many lives. Thottam's prose and her extensive research bring this inspiring story to life. Sisters of Mokama is proof that faith and courage does move mountains."
—Abraham Verghese, author of Cutting for Stone

"Jyoti Thottam is an elegant, lively writer and this story of a group of gutsy women on an unlikely journey is utterly enthralling."
—Sonali Deraniyagala, author of Wave

“An inspiring story about six determined women who defied all odds and changed the world.”
—Nicholas D. Kristof, Pulitzer Prize winning journalist and bestselling coauthor of Half the Sky

“Sisters of Mokama is a moving story about a group of indomitable women, beautifully told by a writer of exceptional talent.”
—Amitav Ghosh, author of Sea of Poppies

"I found myself tearing through the pages, following their journey and feeling every ache, hope, and accomplishment with them. Simply put, it's a must-read by Thottam."
—The Everymom

“Once I started this inspiring and unforgettable story, I couldn’t put it down! ‘Six nuns from Kentucky went to India to open a hospital’ sounds like the start of a bad joke, but it's true: The American frontier spirit led six remarkable women to care for patients in one of the poorest parts of India, in the process opening a nursing school that trained the author's mother. A remarkable tale well told.”
—Theresa Brown, PhD, RN, New York Times bestselling author of The Shift

"Sisters of Mokama takes us on an epic journey from the hills of Appalachia to the badlands of Bihar, to show how much can be accomplished by six women determined to make the world a better place. Among other things, their enterprise enabled the education of the author's mother as a nurse serving India's poorest. At once a loving tribute to a mother and a chronicle of India's infancy as a country struggling to rise from colonialism, Sisters of Mokama is exemplary nonfiction, told with intelligence, sensitivity, and compassion."
—Suketu Mehta, author of Maximum City

"Sisters of Mokama is the inspiring story of six Kentucky nuns who built a hospital in a destitute part of India in 1947, when diseases like cholera were running rampant. Soon, the nuns opened a nursing school—and the mother of New York Times editor Jyoti Thottam (who formerly worked at TIME) was one of the women who studied there. At the time, Indian women rarely left home without a man, so the opportunity to train at the hospital was life-changing. Thottam interviewed more than 60 people to recreate the determination displayed by the doctors and nurses who worked at the hospital in its early years, as well as the women who founded it."
—TIME

“A vivid history . . . The author offers candid, sympathetic portraits of the doctors and nurses who arrived through the years to staff the hospital and especially of the six original founders. . . . An inspiring story of faith and dedication.”
—Kirkus

"A vivid and uplifting portrait . . . full of complex characters and intriguing historical tidbits, this is a rousing story of hope and determination."
—Publishers Weekly