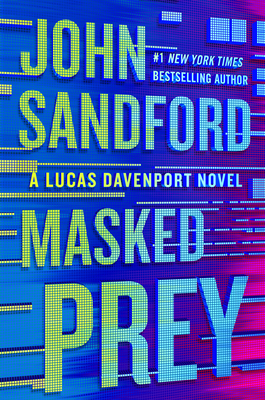 This is book number 30 in the A Prey Novel series.

Lucas Davenport investigates a vitriolic blog that seems to be targeting the children of U.S. politicians in the latest thriller by #1 New York Times-bestselling author John Sandford.

The daughter of a U.S. Senator is monitoring her social media presence when she finds a picture of herself on a strange blog. And there are other pictures . . . of the children of other influential Washington politicians, walking or standing outside their schools, each identified by name. Surrounding the photos are texts of vicious political rants from a motley variety of radical groups.

It's obviously alarming--is there an unstable extremist tracking the loved ones of powerful politicians with deadly intent? But when the FBI is called in, there isn't much the feds can do. The anonymous photographer can't be pinned down to one location or IP address, and more importantly, at least to the paper-processing bureaucrats, no crime has actually been committed. With nowhere else to turn, influential Senators decide to call in someone who can operate outside the FBI's constraints: Lucas Davenport.

John Sandford is the pseudonym for the Pulitzer Prize-winning journalist John Camp. He is the author of twenty-nine Prey novels; four Kidd novels; twelve Virgil Flowers novels; three YA novels coauthored with his wife, Michele Cook; and three other books.

"Addictive...Sandford always delivers rousing action scenes, but this time he's especially good on character, too....There’s enough violence to satisfy bloodthirsty tastes, enough information on neofascism to give us a chill, and enough sly humor to make American teenagers and their would-be killers sound as if English were their second language.”—Marilyn Stasio, The New York Times Book Review

"This entry in the phenomenally popular Prey series will engage longtime fans with its intricate plot and have new readers backtracking through the entire series. Thoroughly involving and very timely."—Booklist