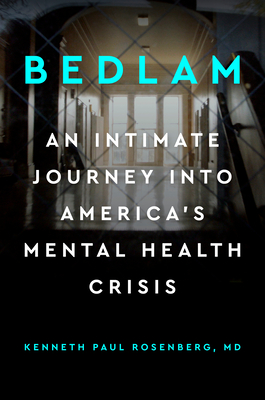 A psychiatrist and award-winning documentarian sheds light on the mental-health-care crisis in the United States.

When Dr. Kenneth Rosenberg trained as a psychiatrist in the late 1980s, the state mental hospitals, which had reached peak occupancy in the 1950s, were being closed at an alarming rate, with many patients having nowhere to go. There has never been a more important time for this conversation, as one in five adults--40 million Americans--experiences mental illness each year. Today, the largest mental institution in the United States is the Los Angeles County Jail, and the last refuge for many of the 20,000 mentally ill people living on the streets of Los Angeles is L.A. County Hospital. There, Dr. Rosenberg begins his chronicle of what it means to be mentally ill in America today, integrating his own moving story of how the system failed his sister, Merle, who had schizophrenia. As he says, "I have come to see that my family's tragedy, my family's shame, is America's great secret."

Dr. Rosenberg gives readers an inside look at the historical, political, and economic forces that have resulted in the greatest social crisis of the twenty-first century. The culmination of a seven-year inquiry, Bedlam is not only a rallying cry for change, but also a guidebook for how we move forward with care and compassion, with resources that have never before been compiled, including legal advice, practical solutions for parents and loved ones, help finding community support, and information on therapeutic options.

Kenneth Paul Rosenberg, MD is a distinguished fellow of the American Psychiatric Association with a private practice in Manhattan, and clinical associate professor of psychiatry at the New York-Presbyterian / Weill Cornell Medical Center. Dr. Rosenberg is also a Peabody Award-winning filmmaker.

“Bedlam captures the nuance and tragedy of America’s current mental illness crisis better than any book I know. The seriously mentally ill individuals who become homeless and incarcerated are not merely numbers but come alive in Dr. Rosenberg’s telling.”—E. Fuller Torrey, MD, author of Surviving Schizophrenia and American Psychosis

“The definitive book on serious mental illness and how we treat it-and more often fail to treat it-today. A source of comfort, as well as of up-to-date information, for people with mental illness and those who care about them, and a call to action for the nation.”—Peter D. Kramer, Emeritus Professor of Psychiatry and Human Behavior at Brown University and author of Listening to Prozac and Ordinarily Well

“Brutal and beautiful. Finally, a book that explains serious mental illness to the public and deciphers the madness of America’s mental health care delivery system. One of the most important books of the year.”—Linda Rosenberg, President and CEO, National Council for Behavioral Health

“Bedlam moves in gentle and revelatory proximity to people striving to survive one of America's worst public policy mistakes. Dr. Ken Rosenberg's gifts as a reporter and bold storyteller are a godsend to the 1 in 5 American families grappling with serious mental illness.”—Sally Jo Fifer, President and CEO, Independent Television Service (ITVS)

“Bedlam blazes new ground in that it shows all the multifaceted problems faced by the seriously mentally ill using their own words and experiences. It then brilliantly interweaves their narratives with savvy policy prescriptions.”—DJ Jaffe, Author of Insane Consequences and Executive Director Mental Illness Policy Org.

“Bedlam strips bare America’s mental health care system and serves as a much-needed roadmap. Read it if you or someone you love needs help. Read it if you care about the one-in-five Americans with mental problems. Read it and advocate for reforms.”—Pete Earley, author of Crazy: A Father’s Search Through America’s Mental Health Madness

“Bedlam not only captivates us as outside observers to this inner world, but also tugs at the rawest of human emotions.”—Travis Parker, M.S., L.I.M.H.P., C.P.C., Program Area Director at Policy Research, Inc.

“The United States has become the worst place in the world to have a severe mental illness. Ken Rosenberg describes this American nightmare with the stark vividness of painful first-hand experience--as brother, as psychiatrist, and as visionary documentary film maker who explains how we got into this barbaric mess and suggests common sense, cost-effective ways to regain our societal sanity.”—Allen Frances, MD, Professor & Chair Emeritus, Duke Department of Psychiatry, Chair DSM-IV Task Force, and Author of Saving Normal

“This utterly absorbing book fixes our attention on what we can do to enable people with serious mental illness to have what we all want: namely a life of relationships, work, contribution and dignity.”—Lloyd I Sederer, MD, (Former) Executive Deputy Commissioner for Mental Hygiene Services in New York City

“Rosenberg has given us the most compelling and important look into what has gone wrong and why, with some ideas on what can make it better. Bedlam is a must read for anyone who cares about humanity, justice and fairness.”—Norman Ornstein, Resident Scholar, American Enterprise Institute and Vice President, Matthew Harris Ornstein Memorial Foundation

“Bedlam is a masterful, moving wake-up call for all of us. It is a must read that illuminates and offers practical solutions. It has my highest recommendation.”—Xavier F. Amador, PhD, author of I’m Not Sick, I Don t Need Help!