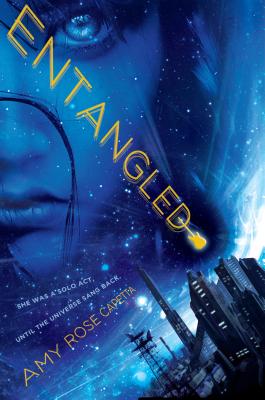 Alone was the note Cade knew best. It was the root of all her chords.

Seventeen-year-old Cade is a fierce survivor, solo in the universe with her cherry-red guitar. Or so she thought. Her world shakes apart when a hologram named Mr. Niven tells her she was created in a lab in the year 3112, then entangled at a subatomic level with a boy named Xan.
Cade’s quest to locate Xan joins her with an array of outlaws—her first friends—on a galaxy-spanning adventure. And once Cade discovers the wild joy of real connection, there’s no turning back.

"Rock and roll crashes head-on into sci-fi in this outing from debut author Capetta. . . Raucous, fun, and futuristic, this should appeal to fans of Antony John's Five Flavors of Dumb and R. J. Anderson's Ultraviolet."
—Booklist

"This is an accomplished debut, an intriguing and thought-provoking space adventure that will hopefully lead to a sequel."
—VOYA, 4Q 4P S

"A rollicking space adventure perfect for fans of the cult classic TV show Firefly."
—The Bulletin of the Center for Children's Books —