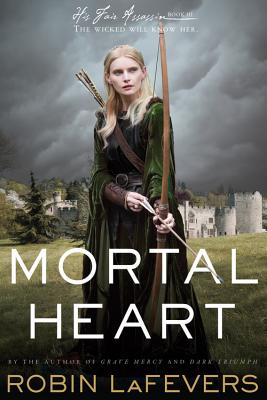 In the powerful conclusion to Robin LaFever's New York Times bestselling His Fair Assassins trilogy, Annith has watched her gifted sisters at the convent come and go, carrying out their dark dealings in the name of St. Mortain, patiently awaiting her own turn to serve Death. But her worst fears are realized when she discovers she is being groomed by the abbess as a Seeress, to be forever sequestered in the rock and stone womb of the convent. Feeling sorely betrayed, Annith decides to strike out on her own. She has spent her whole life training to be an assassin. Just because the convent has changed its mind, doesn’t mean she has.

Robin LaFevers, author of the New York Times best-selling His Fair Assassin books, was raised on fairy tales, Bulfinch’s mythology, and nineteenth-century poetry. It is not surprising that she grew up to be a hopeless romantic. She was lucky enough to find her one true love, and is living happily ever after with him in California. Visit her online at robinlafevers.com and on Twitter @RLLaFevers.

"Devotees of His Fair Assassin will be gratified to rexeive this closure."

* "LaFevers again mesmerizes her readers through the political struggles of 15th century Brittany and the intrigues of the followers of Mortain."
—School Library Journal, starred review

"Teens looking for strong, engaging female characters, the evolution of ancient traditions, or a solid adventure tale will adore every page."
—VOYA

* "Both a powerful tale of political intrigue and a heady supernatural romance, memorable adventure will entirely satisfy devotees of this series."
—Publishers Weekly, starred review

* "[LaFevers] offers readers worthy heroines: fair assassins whose emotions and choices are as rich and complex as their fearsome abilities."
—Booklist, starred review