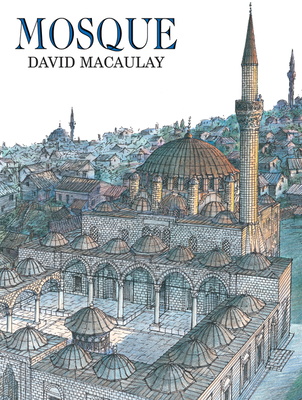 An author and artist who has continually stripped away the mystique of architectural structures that have long fascinated modern people, David Macaulay here reveals the methods and materials used to design and construct a mosque in late-sixteenth- century Turkey. Through the fictional story and Macaulay’s distinctive full-color illustrations, readers will learn not only how such monumental structures were built but also how they functioned in relation to the society they served.
As always, Macaulay has given a great deal of attention to the relationship between pictures and text, creating another brilliant celebration of an architectural wonder.

David Macaulay is an award-winning author and illustrator whose books have sold millions of copies in the United States alone, and his work has been translated into a dozen languages. Macaulay has garnered numerous awards including the Caldecott Medal and Honor Awards, the Boston Globe–Horn Book Award, the Christopher Award, an American Institute of Architects Medal, and the Washington Post–Children’s Book Guild Nonfiction Award. In 2006, he was the recipient of a MacArthur Fellowship, given “to encourage people of outstanding talent to pursue their own creative, intellectual, and professional inclinations.” Superb design, magnificent illustrations, and clearly presented information distinguish all of his books. David Macaulay lives with his family in Vermont.

"Macaulay offers an unusual, inspiring perspective into Islamic society that's removed from the charged headlines, and as in all his work, he conveys a contagious awe and wonder at the design and engineering feats that societies have accomplished."

"As always, the level of visual detail is extraordinary; no less so is the explanation of the mosque's role at the center of the Muslim social and religious life." Publishers Weekly, Starred

"Moving methodically around the complex (a progression aided by the glossary in the back), the text and its superb accompanying drawings explain both the religious and structural underpinnings of the mosque... Magnificent." Kirkus Reviews, Starred

"While there are many books that introduce Islam and its major beliefs and practices to non-Muslim readers, this title provides both a less didactic and arguably more effective look at the religion by placing it within a social context, even one as relatively "cold" as architecture." School Library Journal, Starred

"Architecture and engineering enthusiasts who've reveled in Macaulay's meticulous renderings in CASTLE and CATHEDRAL and their like will applaud their guru's return to his widely respected oeuvre." The Bulletin of the Center for Children's Books, Starred

"'Mosque' is a superbly illustrated and technically engrossing explanation of how a great Turkish mosque complex would be built in about 1600." The New York Times Book Review

"Through a wonderful blend of architectual detail, historical information, and a fictionalized story, the labor put into designing, constructing, and completing a mosque is brought to life." VOYA (Voice of Youth Advocates)

"Macaulay uses a variety of media, delineating both broad vistas and particular details with pen-and-ink and wash while rendering construction scenes with a softer manipulation of line and color." Horn Book —