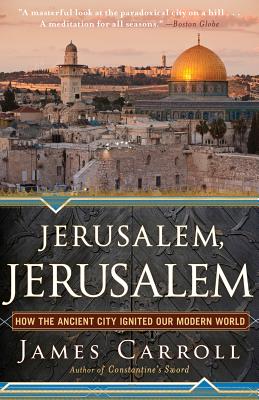 From the New York Times bestselling author of Constantine's Sword comes a richly layered history of Jerusalem, the ancient city at the epicenter of the Christian, Jewish, and Muslim experience.

Jerusalem: the ancient City on a Hill, a place central to three major religions, a transcendent fantasy that ignites religious fervor unlike anywhere else on earth. James Carroll’s urgent, masterly Jerusalem, Jerusalem uncovers the history of the city and explores how it came to define culture in both the Middle East and America. Carroll shows how the New World was shaped by obsessions with Jerusalem, from Christopher Columbus’s search for a westward route to the city, to the fascination felt by American presidents from Abraham Lincoln to Ronald Reagan.

Heavenly Jerusalem defines the American imagination—and always the earthly city smolders. Jerusalem fever, inextricably tied to Christian fervor, is the deadly, unnamed, third party to the Israeli-Palestinian conflicts. Understanding this fever is the key that unlocks world history, and the diagnosis that gives us our best chance to reimagine peace.

“I dare you to read this book and see Jerusalem, or yourself, the same way. —Bernard Avishai, author of The Hebrew Republic

"So provocative and illuminating that it should not be overlooked by anyone who cares about the future of Jerusalem."—Jewish Journal

James Carroll was raised in Washington, D.C., and ordained to the Catholic priesthood in 1969. He served as a chaplain at Boston University from 1969 to 1974, then left the priesthood to become a writer. A distinguished scholar-
in-residence at Suffolk University, he is a columnist for the Boston Globe and a
regular contributor to the Daily Beast.

"A masterful look at the paradoxical city on a hill...a meditation unlike any book published this season, indeed a meditation for all seasons." - Boston Globe "provocative" - San Francisco Chronicle "JERUSALEM, JERUSALEM [is] James Carroll's timely contribution to richer understanding of the conflict over this city....If you want to follow the twists and turns between Israelis and Palestinians over who may end up controlling what in the holy city and why, reading Carroll's book is a helpful place to begin." - St. Louis Today "[Jerusalem, Jerusalem brings a fresh interpretation of the city as well as the spiritual impetus of three monotheisitic religions' toehold in its long, bloody past....By reading this landmark book, those who think they know all there is to know about Jerusalem or the three religions that have coalesced around it will discover how much they didn't know." -Oklahoman the compelling follow-up to [Carroll's] best-selling Constantine’s Sword...his use of Jerusalem as a prism to examine the development of monotheism, and his prescription for what he believes might be a more positive future path, provide a powerful and provocative intellectual journey." - BookPage "one of the broadest and most balanced accounts of the city of King David in recent years...Conceptually profound, richly detailed, and wonderfully realized, this book brings to life the dynamic story of the Divided City." - STARRED, Publishers Weekly "Carroll’s writing is so compelling, so beautifully constructed, that, ironically, the book can be a very slow read. There is something on almost every page that makes the reader want to stop and contemplate. For those meeting Jerusalem for the first time, this volume makes a stunning introduction. For others, who have struggled with the city’s conundrums, either its symbolic meaning in the history of civilization or its place in the modern world, Carroll’s reflections will add clarity if not closure." - STARRED, Booklist "A sound, deeply felt study of Jerusalem as the 'cockpit of violence' for the three Abrahamic religions....Another winner from a skillful writer and thinker of the first rank." - Kirkus "Carroll here explores not Jerusalem but the idea of Jerusalem—how, from the Crusades to Christopher Columbus’s Jerusalem-centric view to the founding of Israel, the city has inspired passionate idealism and hence conflict....one of my nonfiction favorites." - Library Journal —