The Phantom of the Opera (Mass Market) 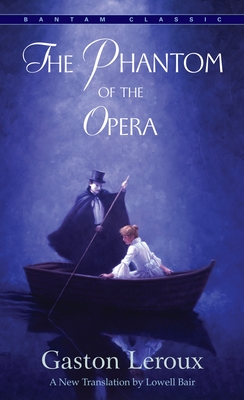 This new translation—the first completely modern and Americanized translation—unfurls the full impact of this classic thriller for modern readers. It offers a more complete rendering of the terrifying figure who emerges from the depths of the glorious Paris Opera House to take us into the darkest regions of the human heart. After the breathtaking performance of the lovely Christine Daae and her sudden disappearance, the old legend of the “opera ghost” becomes a horrifying reality as the ghost strikes out with increasing frequency and violence—always with the young singer at the center of his powerful obsession. Leroux has created a masterwork of love and murder—and a tragic figure who awakens our deepest and most forbidden fears.

This is the only complete, unabridged modern Americanized translation available. Lowell Bair is the acclaimed translator of such Bantam Classics as Madame Bovary, Les Liaisons Dangereuses, and Candide.

Gaston Leroux, French journalist and writer of suspense fiction, was born in Paris in 1868. His experiences as a crime reporter and war correspondent for a French newspaper gave him the background to create his popular novels. He was one of the originators of the detective story, and his young fictional detective, Joseph Rouletabile, was the forerunner of many reporter-detective characters in modern fiction. Two of Leroux’s best-known mysteries are The Perfume of the Lady in Black and The Mystery of the Yellow Room, which is considered one of the finest “locked room” mysteries ever written. A second series of suspense adventures featured an old rascal named Cheri-Bibi. But Leroux’s most enduring work is, of course, The Phantom of the Opera, which was first published in 1910. Leroux died in Nice, France, in 1927.