The Last Action Heroes: The Triumphs, Flops, and Feuds of Hollywood's Kings of Carnage (Hardcover) 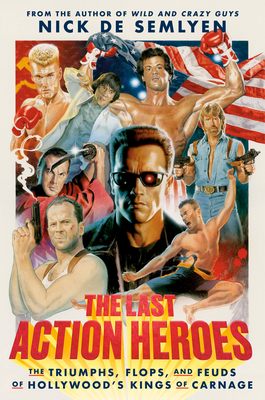 The behind-the-scenes story of the action heroes who ruled 1980s and ’90s Hollywood and the beloved films that made them stars, including Die Hard, First Blood, The Terminator, and more.

The Last Action Heroes opens in May 1990 in Cannes, with Arnold Schwarzenegger and Sylvester Stallone waltzing together, cheered on by a crowd of famous faces. After years of bitter combat—Stallone once threw a bowl of flowers at Schwarzenegger’s head, and the body count in Schwarzenegger’s Commando was increased so the film would “have a bigger dick than Rambo”—the world’s biggest action stars have at last made peace.

In this wildly entertaining account of the golden age of the action movie, Nick de Semlyen charts Stallone and Schwarzenegger’s carnage-packed journey from enmity to friendship against the backdrop of Reagan’s America and the Cold War. He also reveals fascinating untold stories of the colorful characters who ascended in their wake: high-kickers Chuck Norris and Jackie Chan, glowering tough guys Dolph Lundgren and Steven Seagal, and quipping troublemakers Jean-Claude Van Damme and Bruce Willis. But as time rolled on, the era of the invincible action hero who used muscle, martial arts, or the perfect weapon to save the day began to fade. When Jurassic Park trounced Schwarzenegger’s Last Action Hero in 1993, the glory days of these macho men—and the vision of masculinity they celebrated—were officially over.

Drawing on candid interviews with the action stars themselves, plus their collaborators, friends, and foes, The Last Action Heroes is a no-holds-barred account of a period in Hollywood history when there were no limits to the heights of fame these men achieved, or to the mayhem they wrought, on-screen and off.

Nick de Semlyen is the editor of Empire, the world's biggest movie magazine, and the author of Wild and Crazy Guys. As a film journalist, he has also written for Rolling Stone, Stuff, and Time Out. He lives in London.