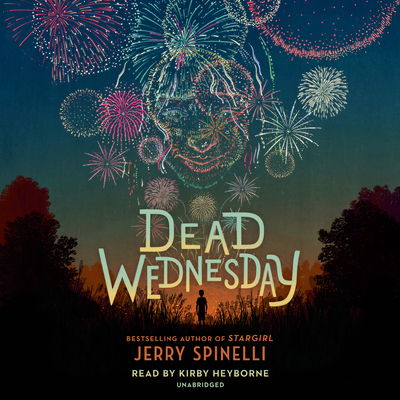 By Jerry Spinelli, Kirby Heyborne (Read by)
$30.00
This item is backordered. Please contact us for an estimated availability date.

“A heartwarming story about living life, dealing with death — even if you’re the one who’s dead — and the impact you have on others’ lives.”
— Melissa Fitzgerald, Watermark Books & Cafe, Wichita, KS

Can playing dead bring you back to life? Maybe on Dead Wednesday… On this day the worlds of a shy boy and a gone girl collide, and the connection they make will change them both forever. A brilliant new novel from the Newbery Medal winner and author of the New York Times bestseller Stargirl.

On Dead Wednesday, every eighth grader in Amber Springs is assigned the name and identity of a teenager who died a preventable death in the past year. The kids don black shirts and for the whole day everyone in town pretends they're invisible—as if they weren't even there. The adults think it will make them contemplate their mortality. The kids know it's a free pass to get away with anything.

Worm Tarnauer feels invisible every day. He's perfectly happy being the unnoticed sidekick of his friend Eddie. So he's not expecting Dead Wednesday to feel that different. But he didn't count on being assigned Becca Finch (17, car crash). And he certainly didn't count on Becca showing up to boss him around! Letting this girl into his head is about to change everything.

This is the story of the unexpected, heartbreaking, hilarious, truly epic day when Worm Tarnauer discovers his own life.

JERRY SPINELLI is the author of many novels for young readers, including Dead Wednesday, The Warden's Daughter; Stargirl; Love, Stargirl; Milkweed; Crash; Wringer; and Maniac Magee, winner of the Newbery Medal; along with Knots in My Yo-Yo String, the autobiography of his childhood. A graduate of Gettysburg College, he lives in Pennsylvania with his wife, poet and author Eileen Spinelli.

Kirby Heyborne is an American musician and actor. After graduating from the University of Utah with a degree in economics, he received critical acclaim for his starring role in the award-winning World War II drama Saints and Soldiers. He has starred in many feature films and national commercials, and has appeared on Everwood and Free Ride. He is well known for his narration and voice work on several audiobooks. In addition, he can frequently be found touring the country with his singing and songwriting act.

"Spinelli shines at setting a tongue-in-cheek tone for a tale with serious underpinnings, and as in Stargirl, readers will be swept into the relationship that develops between this adolescent odd couple. Characters to love, quips to snort at, insights to ponder." —Kirkus Reviews, starred review

"Spinelli writes with wry humor that still makes room for sweetness and a belief in the impossible. A stellar pick for tween collections." —Booklist, starred review

“This fever dream of a story about self-acceptance and forgiveness is unforgettable.” —Shelf Awareness, starred review

"Centering meaningful themes of ephemerality, forgiveness, and self-acceptance, Spinelli’s characters will undoubtedly dig their way into the hearts of readers who need them most." —Publishers Weekly

"Spinelli makes the relationship between a boy and a ghost heartwarming; the life lessons of a dead girl profound; and social commentary astute but not didactic. Dialogue is snappy, and every scene is tight and memorable." —The Horn Book Magazine

"Throughout his career, Newbery Medalist Jerry Spinelli has shown he’s a master of evoking the particular pangs felt in adolescence." —Time Magazine