The Revolution That Wasn't: GameStop, Reddit, and the Fleecing of Small Investors (Hardcover) 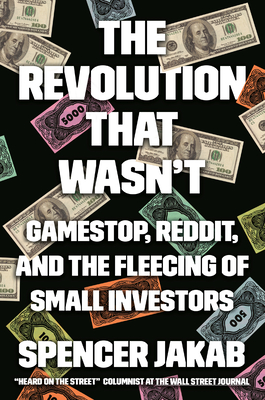 "The saga of GameStop and other meme stocks is revealed with the skill of a thrilling whodunit. Jakab writes with an anti-Midas touch. If he touched gold, he would bring it to life." --Burton G. Malkiel, author of A Random Walk Down Wall Street

From Wall Street Journal columnist Spencer Jakab, the real story of the GameStop squeeze—and the surprising winners of a rigged game.

During one crazy week in January 2021, a motley crew of retail traders on Reddit’s r/wallstreetbets forum had seemingly done the impossible—they had brought some of the biggest, richest players on Wall Street to their knees. Their weapon was GameStop, a failing retailer whose shares briefly became the most-traded security on the planet and the subject of intense media coverage.

The Revolution That Wasn’t is the riveting story of how the meme stock squeeze unfolded, and of the real architects (and winners) of the GameStop rally. Drawing on his years as a stock analyst at a major bank, Jakab exposes technological and financial innovations such as Robinhood’s habit-forming smartphone app as ploys to get our dollars within the larger story of evolving social and economic pressures. The surprising truth? What appeared to be a watershed moment—a revolution that stripped the ultra-powerful hedge funds of their market influence, placing power back in the hands of everyday investors—only tilted the odds further in the house’s favor.

Online brokerages love to talk about empowerment and “democratizing finance” while profiting from the mistakes and volatility created by novice investors. In this nuanced analysis, Jakab shines a light on the often-misunderstood profit motives and financial mechanisms to show how this so-called revolution is, on balance, a bonanza for Wall Street. But, Jakab argues, there really is a way for ordinary investors to beat the pros: by refusing to play their game.

Spencer Jakab is an award-winning financial journalist and a former top-rated stock analyst at Credit Suisse. He edits the Wall Street Journal’s “Heard on the Street” column and previously wrote the daily investing column “Ahead of the Tape.” Prior to joining the Journal he wrote for the "Lex" and "On Wall Street" columns at Britain’s Financial Times. This is his second book.

“A thrumming narrative… Anybody who buys and sells stocks, and anyone who “invests” in anything old or new, should read this book.”
--The LA Times

“Spencer Jakab, a columnist at the Wall Street Journal, unknots the threads of this complex financial tale. His is a pacey and comprehensive account that takes in the structural changes in finance and the media that made the turmoil possible … the story is deftly told. If the first draft of history was not quite on the money, as Mr Jakab contends, his second go has set the record straight.”
--The Economist

"Ever since the GameStop saga erupted into the headlines in the winter of 2021, we’ve all been waiting for the definitive take. Spencer Jakab’s book is it. No matter how much you think you know about Wall Street, this book will surprise you, infuriate you – and educate you."
--Bethany McLean, bestselling coauthor of The Smartest Guys in the Room and All the Devils are Here

"Delightfully written illustrations of how “free” and gamified trading has contributed to frenzied stock market activity with some serious warnings about the dangers facing retail investors tempted to join the wild party. The saga of GameStop and other meme stocks is revealed with the skill of a thrilling whodunit. Jakab writes with an anti-Midas touch. If he touched gold, he would bring it to life."
--Burton G. Malkiel, author of A Random Walk Down Wall Street

"The Revolution That Wasn’t is a gripping account of the social movement that took over the investing world in 2020. The heroes here thought they were sticking it to the man, but became the man’s stick. The story is told with warmth and humor, making financial concepts accessible to a lay audience. You will be entertained."
--Scott Galloway, Professor of Marketing at NYU Stern School of Business, and New York Times bestselling author of The Four and Post Corona

"An important look at how markets -- and people -- defy prediction and occasionally lose their minds."
--Morgan Housel, bestselling author of The Psychology of Money

“Spencer Jakab's The Revolution That Wasn't is essential, riveting reading if you want to understand the collision of long and short-term factors that sparked the remarkable "meme stonk" frenzy of 2021. Jakab adeptly skewers the popular but dangerously wrong narrative of Reddit's David thumping Wall Street's Goliath, and shows how the casino always wins in the end. DeepF***ingRespect for an important book with lessons far more durable than GameStop's stock market levitation.”
--Robin Wigglesworth, author of Trillions

“The real story of the GameStop short squeeze. Jakab walks us through every twist and turn with nuanced insight and sheds a clarifying light on the shifts happening in today’s retail revolution.”
--Jaime Rogozinski, founder of Reddit's WallStreetBets

“A timely and hugely important book. Spencer Jakab is a top-drawer journalist who understands this industry inside out. I can’t recommend this book highly enough.”
--Robin Powell, journalist, author and editor of The Evidence-Based Investor

“An unputdownable post-mortem of the freakiest tale of pandemic-age finance – and of how investing became gamified. Jakab speaks with the key characters and highlights the structural issues, deploys the nihilistic “degen” jargon and recounts priceless anecdotes, cutting through the narrative to tell us what really happened during the GameStop short squeeze.”
--Gian M. Volpicelli, Senior Writer, Wired