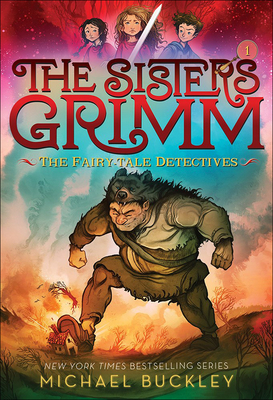 Fans of fractured fairy tales will be delighted to discover the fantasy, mystery, adventure, and humor in the belovedNew York Times bestselling Sisters Grimm series by Michael Buckley, now with new cover art. As featured on NBC's The Today Show, the nine wildly popular books are favorites around the world. They were among the first books to bring a distinctly girl-power spin to fairy tales a spintaken up by hit movies and shows TV such as Once Upon a Time, Grimm, and Maleficent, the bestselling book seriesTheLand of Stories, and other.New covers willappear on book one, The Sisters Grimm: The Fairy-Tale Detectives; book two, The Sisters Grimm: The Unusual Suspects; and book three, The Sisters Grimm: The Problem Child. Books four through nine will be available in revised editions soon. ?
In this first book in the series, orphaned sisters Sabrina and Daphne are sent to live with their recently discovered grandmother, Relda Grimm. The girls learn that they are descendants of the Brothers Grimm, whose famous tome of fairy tales is actually a history book. The girls are pitted against a giant, who has been rampaging through town. But who set the giant loose in the first place? Was it Mayor Charming (formerly Prince Charming), who has plans to get his kingdom back? The Three Not-So-Little Pigs, now working as police officers? Or a giant-killer named Jack, currently working at a Big & Tall store?
With an irresistible combination ofadventure and imagination, the Sisters Grimm series injects classic fairy tales with modern day sensibilities and suspense, creating a fantastical combination readers of all ages will love.
Kids will love Sabrina and Daphne's adventures as much as I did.
Sarah Michelle Gellar, star of Buffy the Vampire Slayer and I Know What You Did Last Summer
Adventure, laughs, and surprises kept me eagerly turning the pages. R. L. Stine, author of the Goosebumps series
Why didn t I think of The Sisters Grimm? What a great concept Jane Yolen, award-winning author
Terrific, head-spinning series . . . Rich in well-set-up surprises and imaginatively tweaked characters, this tongue-in-cheek frolic features both a pair of memorable young sleuths and a madcap plot with plenty of leads into future episodes. Kirkus Reviews, starred review
Enormously entertaining, the book takes the fractured fairy-tale genre to new heights. Time Out New York Kids
An idea that will make other children's book writers, and tons of aspiring ones, kick themselves for not thinking of it first. The San Antonio Express-News
A page-turner that incorporates humor, tension, suspense and a wild cast of characters, readers will have trouble putting this novel down. The Dallas Morning News
Quirky and reasonable characters, engaging writing, fresh fairy tale references, and a very real fantasy setting. The Raleigh News and Observer, Most Promising New Series
The twists and turns of the plot, the clever humor, and the behind-the-scenes glimpses of Everafters we think we know, will appeal to many readers. Kliatt, starred review.