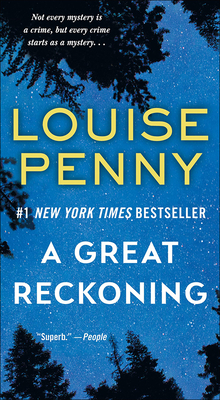 This is book number 12 in the Chief Inspector Gamache Novel series.

“There is something rotten at the Surete academy, and the now-retired Chief Inspector Armand Gamache has been brought in to clean it up. In the meantime, a strange map has been found in Three Pines. Old friends, new characters, murder, and history combine in another irresistible tale from Penny, whose writing is always compassionate, funny, and literate. This latest in the series is not to be missed.”
— Kathy Magruder (W), Pageturners Bookstore, Indianola, IA

"Deep and grand and altogether extraordinary....Miraculous."
The Washington Post

A Great Reckoning succeeds on every level."
St. Louis Post-Dispatch

On the first day of his new job, Armand Gamache is given the gift of an intricate old map that was stuffed in the walls of the bistro of Three Pines the Quebec village he now calls home. The map eventually leads him to shattering secrets, and an old friend and older adversary. It leads the former Chief of Homicide to places even he is afraid to go. But must.

There he finds four young cadets in the police academy, and a dead professor. And, with the body, a copy of the old, odd map.

Everywhere Gamache turns, he sees one of the cadets. Tattooed and pierced. Guarded and angry. Amelia Choquet is more likely to be found on the other side of a police lineup. And yet there she is protegee of the murdered professor. Now, for both Amelia and Gamache, the time has come for a great reckoning.

LOUISE PENNY is the #1 New York Times and Globe and Mail bestselling author of a dozen Chief Inspector Armand Gamache novels. She has won numerous awards, including a CWA Dagger and the Agatha Award (five times) and was a finalist for the Edgar Award for Best Novel. She lives in a small village south of Montreal."