Who Was Pete Seeger? (Prebound) 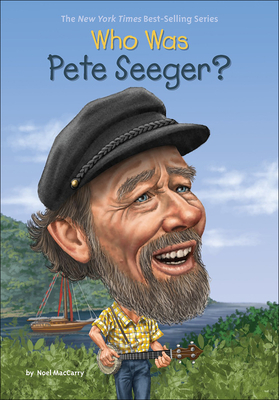 Pete Seeger was an American folk musician and social activist whose outspoken songs about freedom and justice got him blacklisted from radio and TV for years.
Pete Seeger was still singing and playing the banjo for tens of thousands of fans even when he was at the age of ninety-four. Born in New York City on May 3, 1919, Pete came from a family of musicians. Despite writing and singing folk songs that all of America knows, not many kids know his name. Why? Because his ties to the Communist Party got him banned from radio and television for many years Well-known for his civil rights activism with Martin Luther King Jr., Seeger also spearheaded efforts that cleaned up the Hudson River and made it beautiful again. His best-known songs include "Where Have All the Flowers Gone?," "If I Had a Hammer" and "Turn, Turn, Turn."
In this easy-to-read biography from the New York Times best-selling series, Pete Seeger is revealed as not just a performer but as a champion for a better world and the eighty illustrations contained in the book help bring his story to life.

Noel MacCarry worked as an elementary school librarian in North Salem, New York, for twenty-seven years. This is his first published book. He lives in Danbury, Connecticut.