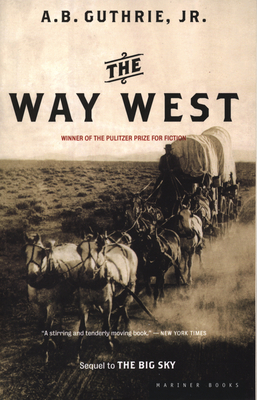 The sequel to The Big Sky, The Way West is the Pulitzer Prize–winning novel of the American West by A. B. Guthrie, the Academy Award–nominated screenwriter of Shane.

This enormously entertaining classic brings to life the adventure of the western passage and the pioneer spirit, charting a frontiersman's return to the untamed West in 1846.

Dick Summers, as pilot of a wagon train, guides a group of settlers on the difficult journey from Missouri to Oregon. In sensitive but unsentimental prose, Guthrie illuminates the harsh trials and resounding triumphs of pioneer life.

A celebrated novel, The Way West pays homage to the grandeur of the western wilderness, its stark and beautiful scenery, and its extraordinary people.

"With A. B. Guthrie, the pioneer West has found its novelist at last."—Bernard DeVoto, Pulitzer Prize–winning historian

A. B. GUTHRIE, JR. (1901–1991), was the author of numerous books, including six Big Sky novels, as well as the Academy Award–nominated screenplay for the classic film Shane. He received the 1950 Pulitzer Prize for his novel The Way West. Guthrie was honored for his contribution to literature and his portrayal of the American West.

"With sure skill, with absolute command of every detail of equipment, custom, speech, and thought . . . Mr. Guthrie has written a stirring and tenderly moving book." The New York Times —