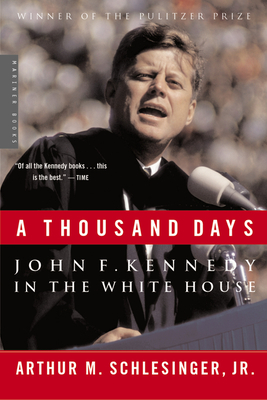 Pulitzer Prize– and National Book Award–winner: "Of all the Kennedy books . . . this is the best."—Time

Arthur M. Schlesinger Jr. served as special assistant to President John F. Kennedy throughout his presidency—from the long and grueling campaign to Kennedy’s tragic and unexpected assassination by Lee Harvey Oswald. In A Thousand Days, Schlesinger combines intimate knowledge as one of President Kennedy’s inner circle with sweeping research and historic context to provide a look at one of the most legendary presidential administrations in American history.

From JFK’s battle with Nixon during the 1960 election, to the seemingly charmed inaugural days, to international conflict and domestic unrest, Schlesinger takes a close and fond, but unsparing, look at Kennedy’s tenure in the White House, covering well-known successes, like his involvement in the Civil Rights movement; infamous humiliations, like the Bay of Pigs; and often overlooked struggles, like the Skybolt missile mix-up, alike.

A Thousand Days is “at once a masterly literary achievement and a work of major historical significance” (New York Times).

ARTHUR M. SCHLESINGER, JR., the author of sixteen books, was a renowned historian and social critic. He twice won the Pulitzer Prize, in 1946 for The Age of Jackson and in 1966 for A Thousand Days. He was also the winner of the National Book Award for both A Thousand Days and Robert Kennedy and His Times (1979). In 1998 he was awarded the prestigious National Humanities Medal.