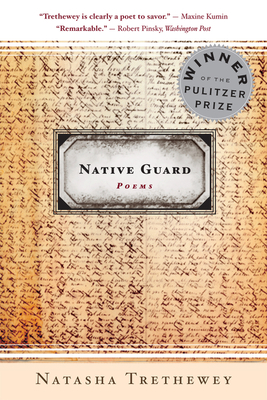 Winner of the 2007 Pulitzer Prize for poetry and former U.S. Poet Laureate, Natasha Trethewey’s elegiac Native Guard is a deeply personal volume that brings together two legacies of the Deep South.
The title of the collection refers to the Mississippi Native Guards, a black regiment whose role in the Civil War has been largely overlooked by history. As a child in Gulfport, Mississippi, in the 1960s, Trethewey could gaze across the water to the fort on Ship Island where Confederate captives once were guarded by black soldiers serving the Union cause.?
The racial legacy of the South touched Trethewey’s life on a much more immediate level, too. Many of the poems in Native Guard pay loving tribute to her mother, whose marriage to a white man was illegal in her native Mississippi in the 1960s. Years after her mother’s tragic death, Trethewey reclaims her memory, just as she reclaims the voices of the black soldiers whose service has been all but forgotten.

NATASHA TRETHEWEY, two-term U.S. Poet Laureate, Pulitzer Prize winner, and 2017 Heinz Award recipient, has written five collections of poetry and one book of nonfiction. An American Academy of Arts and Sciences fellow, she is currently Board of Trustees professor of English at Northwestern University. She lives in Evanston, Illinois.