The Story of Tata: 1868 to 2021 | An authorized account of the Tata family and their companies with exclusive interviews with Ratan Tata | Non-fiction Biography, Penguin Books (Hardcover) 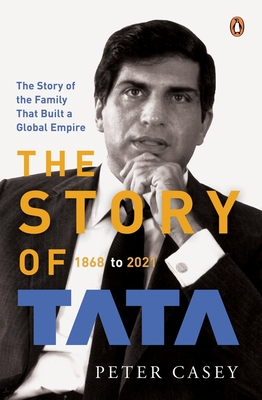 The first and only authorized biography on Tata Group including the Tata-Mistry legal battle, exclusive interviews with Ratan Tata, and never-before-seen photographs of the Tata family.

In 1868, Jamsetji Tata, a visionary of his time, lit the flame that went on to become Tata and its group of companies. This business grew into an extraordinary one. One that some may even call 'the greatest company in the world'. Over the decades, the business expanded and prospered under the leadership of the various keepers of the flame, such as Sir Dorabji Tata, J.R.D. Tata and Ratan Tata, to name a few. But one day, the headlines boldly declared that the chairman of the board of Tata Sons, Cyrus Mistry, had been fired.

In this exclusive and authorized book, insiders of the Tata businesses open up to Peter Casey for the first time to tell the story. From its humble beginnings as a mercantile company to its growth as a successful yet philanthropic organization to its recent brush with Mistry, this is a book that every business- minded individual must read.

Peter Casey is founder and executive chairman of Claddagh Resources, a global recruitment and search business that places high-level executives with many of the world's Fortune 500 companies. Having established successful business interests in Australia and Ireland, Peter set up Claddagh Resources in Atlanta, Georgia, in 1995. Claddagh currently operates on four continents.

Peter was named by Irish America magazine as one of the leading Irish-American businessmen for 2007. He has had a wide portfolio of business interests, including commercial, residential and agricultural property in Ireland. His approach to business is simple-he likes to invest in people. Peter is also an accomplished writer and a political and business commentator, with articles published regularly in Ireland and the United States. He is best known, perhaps, as an investor on the Irish television programme Dragons' Den, in which he is one of the Dragons. He tweets with the handle @TheDragonPeter. You can find out more about his work at www.petercasey.ie.

Peter lives in Atlanta with his wife, Helen, and their five children, and divides his time between there and his family home in Derry. Outside work he enjoys playing golf badly!