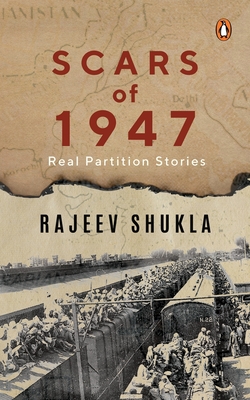 <p>After more than seven decades, the burden of grief for those displaced and affected by the Partition of India in 1947 still bears heavy. The two pieces of land were carved by a mere stroke of ink on the surface of a map, but the resultant wounds ran way deeper, from one generation to the next. <br>This is the story of India's independence and it cost the nation more than land, resources and lives. People on both sides of the dreaded Radcliffe line that divided India and Pakistan experienced a similar trauma. The riots, bloodbath, fear, cries for help, burning houses and the devastating displacement of millions is forever etched in memories of those who survived this nightmare. Yet, there are also some uplifting instances of the triumph, grit and determination, inspiring tales of love, kindness and the perseverance of the human spirit. <br>Rajeev Shukla has gathered many such stories of Partition over the years-stories from people who went on to become prominent figures like prime ministers, presidents, industrialists, medical researchers, et al, in both India and Pakistan. From Manmohan Singh to Gauri Khan's maternal grandmother Champa Tiwari, from Taimur Bande, Syyed Imtiaz Humayun to Avtar Narain Gujral, the narratives in <i>Scars of 1947</i> take you on a journey back to a point in time that left two nations scarred forever.</p>

<p><b>Rajeev Shukla</b> is a renowned Indian statesman and a man donning multiple hats in various fields for more than four decades now. He has earned great success as one of India's top sports administrators, journalist, respected politician and a popular television host. He served as the chairman of Indian Premier League (IPL) multiple times and as a former minister, member of Rajya Sabha, and as a minister of state for planning and parliamentary affairs. He is currently serving as the vice president for Board of Control for Cricket in India (BCCI) and as member, Congress Working Committee and state-in-charge for Himachal Pradesh.<br><br> As the host of the distinguished popular talk-show 'Ru-ba-ru', he interviewed eminent personalities including political leaders, film stars, cricketers-national as well as international figures. His journey in the print media as editor and contributor for various English and Hindi dailies gave voice to his in-depth analysis of national and international political scenario.</p>