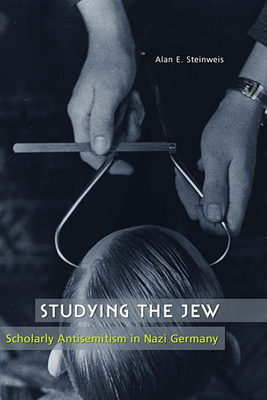 By Alan E. Steinweis
This item is backordered and not currently available. Please contact us for an estimated availability date.

Early in his political career, Adolf Hitler declared the importance of what he called "an antisemitism of reason." Determined not to rely solely on traditional, cruder forms of prejudice against Jews, he hoped that his exclusionary and violent policies would be legitimized by scientific scholarship. The result was a disturbing, and long-overlooked, aspect of National Socialism: Nazi Jewish Studies.

Studying the Jew investigates the careers of a few dozen German scholars who forged an interdisciplinary field, drawing upon studies in anthropology, biology, religion, history, and the social sciences to create a comprehensive portrait of the Jew--one with devastating consequences. Working within the universities and research institutions of the Third Reich, these men fabricated an elaborate empirical basis for Nazi antisemitic policies. They supported the Nazi campaign against Jews by defining them as racially alien, morally corrupt, and inherently criminal. In a chilling story of academics who perverted their talents and distorted their research in support of persecution and genocide, Studying the Jew explores the intersection of ideology and scholarship, the state and the university, the intellectual and his motivations, to provide a new appreciation of the use and abuse of learning and the horrors perpetrated in the name of reason.