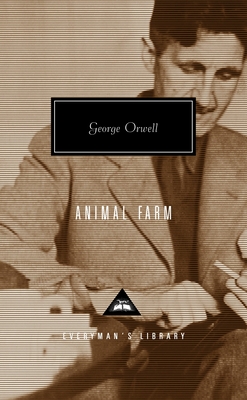 One of Time magazine's 100 best English-language novels and the most famous of all twentieth-century political allegories.

This account of a group of barnyard animals who revolt against their vicious human master, only to submit to a tyranny erected by their own kind, is a universal drama. Taking as his starting point the betrayed promise of the Russian Revolution, Orwell lays out a vision that, in its bitter wisdom, gives us the clearest understanding we possess of the possible consequences of our social and political acts. Orwell is one of the very few modern satirists comparable to Jonathan Swift in power, artistry, and moral authority; in Animal Farm his spare prose and the logic of his dark comedy brilliantly highlight his stark message.

“A wise, compassionate, and illuminating fable for our times.” --The New York Times

“Remains our great satire on the darker face of modern history.” --Malcolm Bradbury

George Orwell (1903-1950) served with the Imperial Police in Burma, fought with the Republicans during the Spanish Civil War, and was a member of the Home Guard and a writer for the BBC during World War II. He is the author of many works of non-fiction and fiction.

“As lucid as glass and quite as sharp…[Animal Farm] has the double meaning, the sharp edge, and the lucidity of Swift.” –Atlantic Monthly

“A wise, compassionate, and illuminating fable for our times.” –New York Times

“Orwell has worked out his theme with a simplicity, a wit, and a dryness that are close to La Fontaine and Gay, and has written in a prose so plain and spare, so admirably proportioned to his purpose, that Animal Farm even seems very creditable if we compare it with Voltaire and Swift.” –Edmund Wilson, The New Yorker

“The book for everyone and Everyman, its brightness undimmed after fifty years.” –Ruth Rendell

With an Introduction by Julian Symons