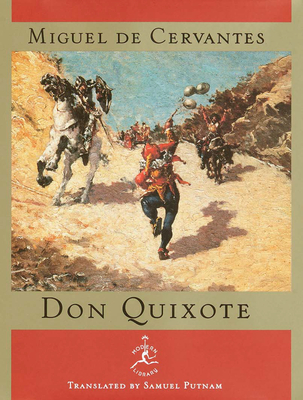 "        Don Quixote is practically unthinkable as a living being," said novelist Milan Kundera. "And yet, in our memory, what character is more alive?"
----Widely regarded as the world's first
modern novel, Don Quixote chronicles the famous picaresque adventures of the noble knight-errant Don Quixote de La Mancha and his faithful squire, Sancho Panza, as they travel through sixteenth-century Spain. This Modern Library edition presents the acclaimed Samuel Putnam translation of the epic tale, complete with notes, variant readings, and an Introduction by the translator.
----The debt owed to Cervantes by literature is immense. From Milan Kundera: "Cervan-
tes is the founder of the Modern Era. . . . The novelist need answer to no one but
Cervantes." Lionel Trilling observed: "It can be said that all prose fiction is a variation on the theme of Don Quixote." Vladmir Nabo-kov wrote: "Don Quixote is greater today than he was in Cervantes's womb. [He] looms so wonderfully above the skyline of literature, a gaunt giant on a lean nag, that the book lives and will live through [his] sheer vitality. . . . He stands for everything that is gentle, forlorn, pure, unselfish, and gallant. The parody has become a paragon." And V. S. Pritchett observed: "Don Quixote begins as a province, turns into Spain, and ends as a universe. . . . The true spell of Cervantes is that he is a natural magician in pure story-telling."


The Modern Library has played a significant role in American cultural life for the better part of a century. The series was founded in 1917 by the publishers Boni and Liveright and eight years later acquired by Bennett Cerf and Donald Klopfer. It provided the foun-
dation for their next publishing venture, Random House. The Modern Library has been a staple of the American book trade, providing readers with affordable hardbound editions of important works of literature and thought. For the Modern Library's seventy-fifth anniversary, Random House redesigned the series, restoring as its emblem the running torchbearer created by Lucian Bernhard in 1925 and refurbishing jackets, bindings, and type, as well as inaugurating a new program of selecting titles. The Modern Library continues to provide the world's best books, at the best prices.

Carlos Fuentes is the author of more than a dozen novels, including The Years with Laura D?az, The Old Gringo, and The Death of Artemio Cruz.

"Cervantes's masterpiece is lucky to have found so perfect a translator as the flamboyant Smollett. The rambunctious personalities of author and translator are ideally matched."